Box office hit record high in the European Union in 2015

EU gross box office reached a record high of around €7.3 billion in 2015, and film production rose again to over 1,600 feature films

Based on provisional data the European Audiovisual Observatory estimates that cumulative GBO in the 28 EU Member States rocketed to around €7.3 billion. This is 16% higher than the previous year and represents – not adjusted for inflation - the highest level on record. GBO growth was driven both by an increase in admissions as well as rising ticket prices: Admissions increased by 7.4% to 976 million tickets sold. This is 67.5 million more than in 2014 and represents the second highest level registered in the EU in the past ten years. Only in 2009 did cinemas in the EU sell more tickets boosted by Avatar and the novelty factor of 3D. The estimated pan-European average ticket price – measured in euros – increased from €7.00 to around €7.50. It is remarkable to note that in 2015 GBO – measured in local currencies – increased in all 26 EU markets for which provisional data are available. This represents the most homogenous growth trend across territories observed in at least the past ten years. The growth in cumulative EU gross box office was particularly boosted by the strong year-on-year performances in the UK and Ireland which registered – also thanks to an appreciation of the British Pound against the Euro – an increase of almost €400 million (+30%) as well as Germany (+€187 million, +19%).

Outside the EU, the Russian Federation confirmed its position as the second largest European market in terms of admissions with 174 million tickets sold and a GBO of RUB 44.1 billion, a 1.9% increase on 2014. As in Russia box office growth in Turkey somewhat levelled out, with admissions falling slightly by 1.5% to 60.5 million and GBO increasing to TRY 681 million (+4%), the highest level in the past few decades.

In contrast to 2014, admissions growth was driven primarily by the strong performances of a number of US studio titles which accounted for 18 out of the top 20 performing films in the EU in 2015. The charts were topped by Star Wars: The Force Awakens (39.8 million admissions), Minions (39.5 million), Spectre [+see also:
trailer
making of
film profile] (37.9 million) and Jurassic World (30.4 million). It is interesting to note that all of these four top films sold more than 30 million tickets in the EU in 2015 while not a single film managed to reach this benchmark in 2013 or 2014. As in previous years box office was dominated by sequels / prequels or spin-offs which accounted for nine out of the top 10 titles. On a cumulative basis, US films took an estimated market share of 64%, slightly up on 2014’s 63.2%. An even bigger boost to box office growth however came from the renewed strength of UK incoming investment films such as Spectre or Kingsman: The Secret Service [+see also:
trailer
film profile] as the market share of European films produced in Europe with incoming US investment (€ inc) rose from 0.4% to 7.3%.

Admissions for European films on the other hand declined causing European market share in the EU to drop from its exceptional 2014 record level of 33.5% to an estimated 26.1% as only two European films made it into the top 20, French action thriller Taken 3 [+see also:
trailer
film profile] (8.9 million admissions) and German comedy Fack ju Göhte 2 [+see also:
trailer
film profile] (8.6 million). Nevertheless, European films continued to perform well on several national markets - often thanks to the success of a couple of local blockbusters – including France (35.2%), Denmark (29.8%), Finland (29.9%) or Germany (27.5%). Boosted by the success of UK qualifying films such as Star Wars or Spectre, UK films captured a record market share of 44.5% making the UK the EU market with the highest national market share in 2015. UK independent films as defined by the BFI (i.e. excluding films with US studio backing) accounted for 10.6%. 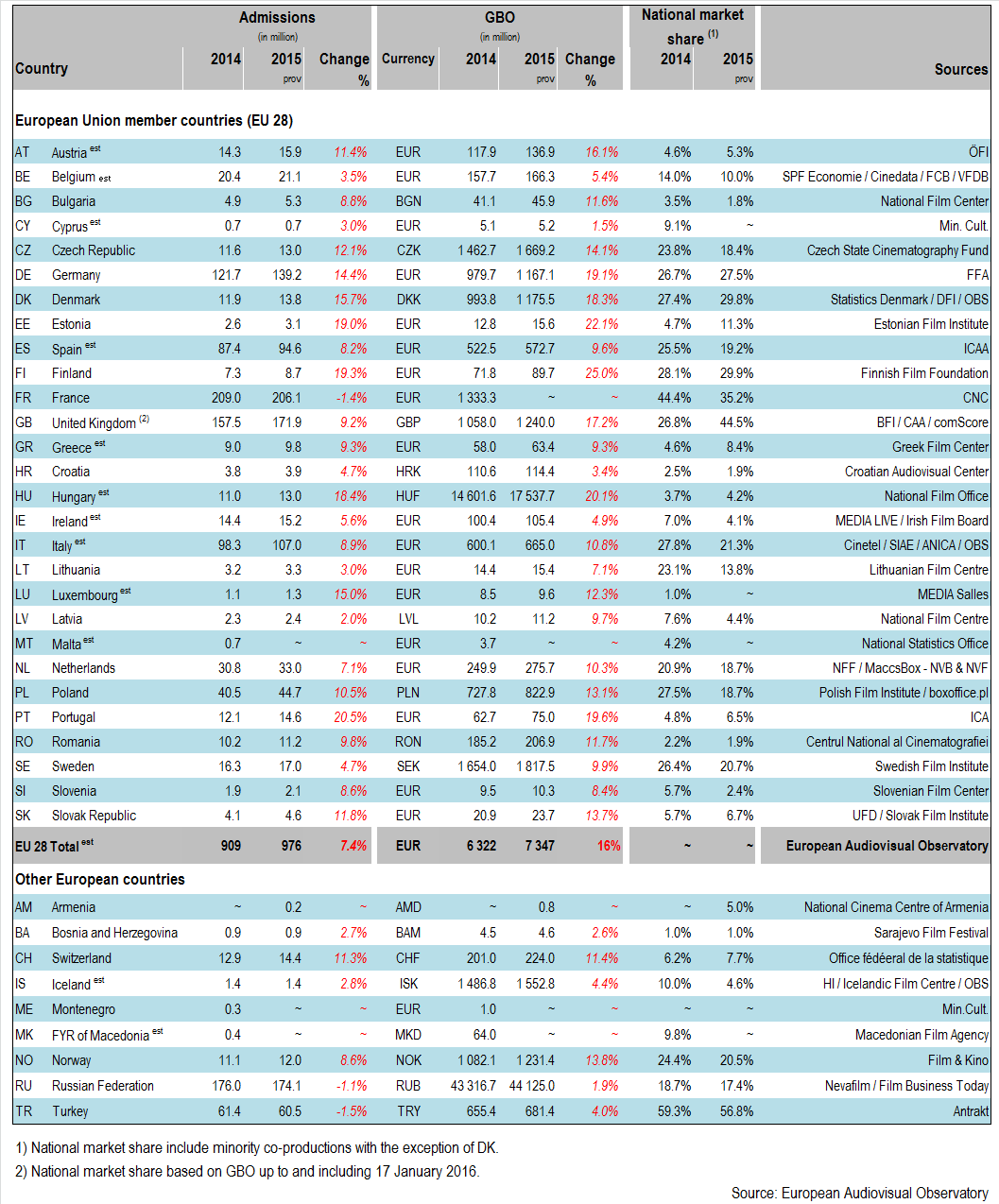 Table 2: Top 20 films by admissions in the European Union in 2015 prov 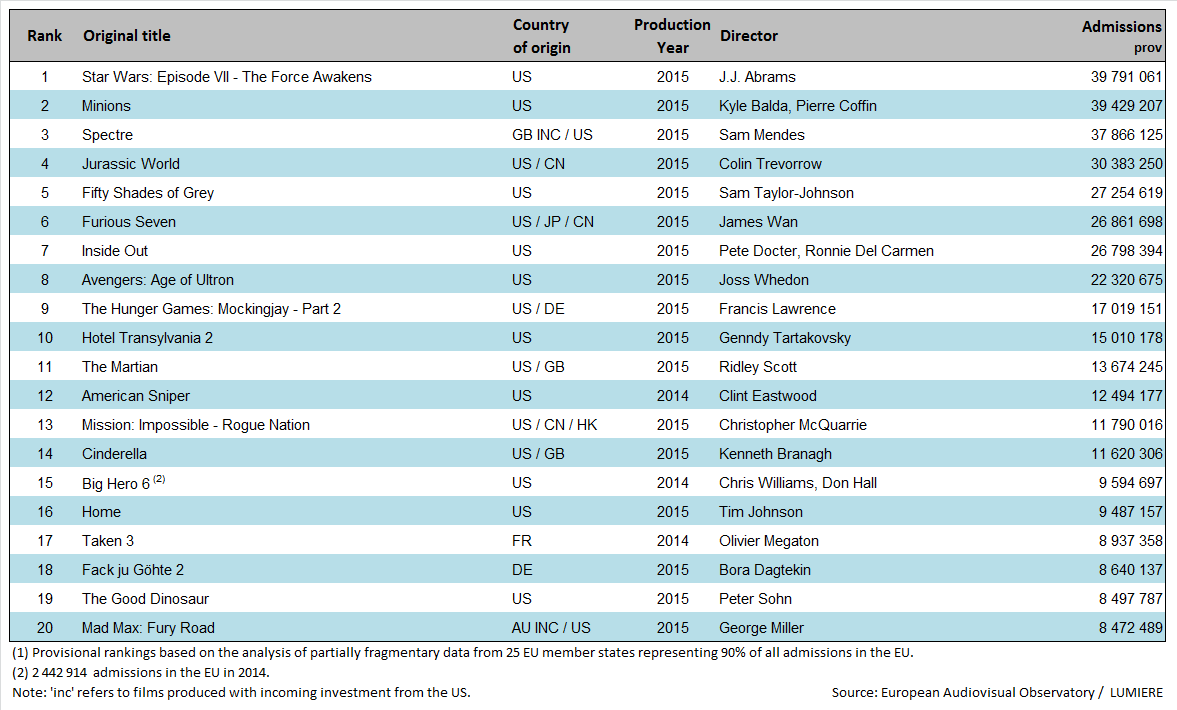 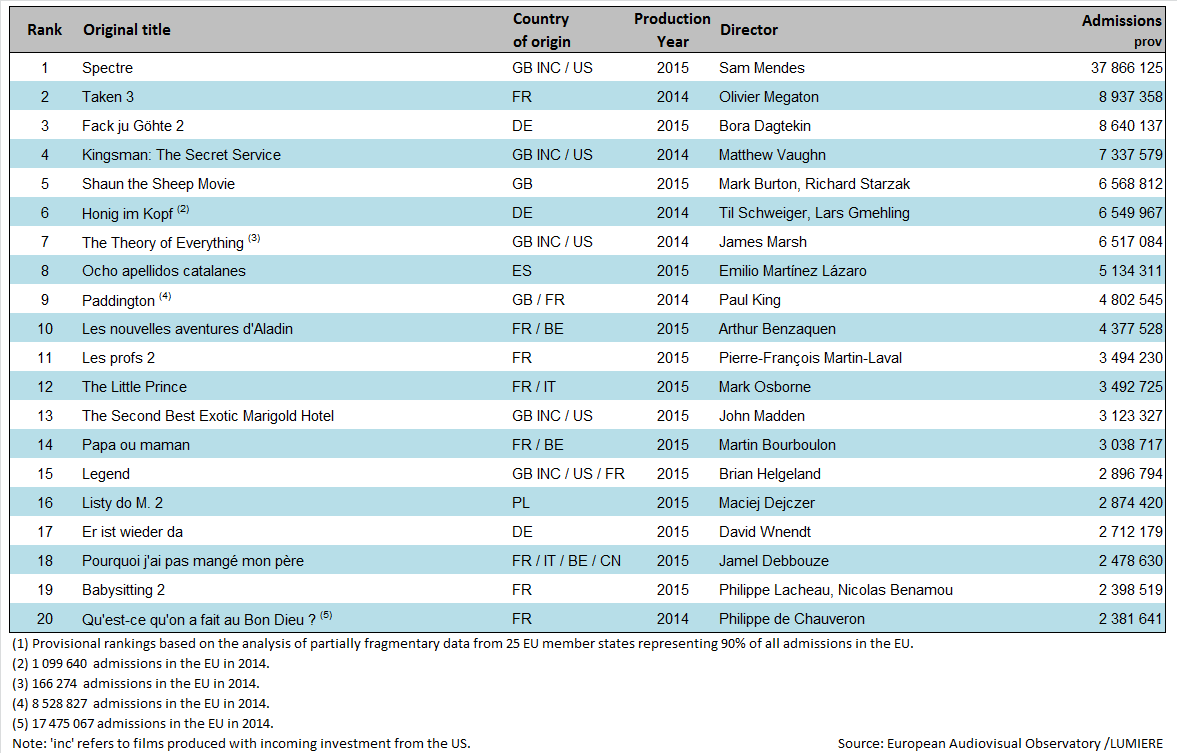 In contrast to 2014, admissions growth was driven primarily by the strong performances of a number of US studio titles. On a cumulative basis, admissions to US films increased by around 50 million leading to an estimated market share of 64%, while the biggest box office boost came from the renewed strength of UK films produced with incoming US investment (GB inc) whose market share rose from 0.4% to 7.3%. Admissions for European films on the other hand, declined causing European market share in the EU to drop from its exceptional 2014 record level of 33.5% to an estimated 26.1%, the lowest level in the past five years.

After having come to a temporary halt in 2014 EU production levels continued their growth trend of recent years, as the estimated number of European feature film productions increased from 1 593 to 1 643 theatrical films. This figure breaks down into an estimated 1 127 fiction films (69%) and 516 feature documentaries (31%). The increase in production activity was primarily linked to an increasing number of co-productions which accounted for 24% of total production volume in 2015.

Digital conversion rate in the EU remains at 92%

According to figures provided by MEDIA Salles the digitisation process in the EU has been more or less completed in the EU. By the end of 2015 a total of 19 EU Member States had converted 90% or more of their screen base. Only three Member States registered digital screen penetration rates below 70%: Estonia (69%), Lithuania (61%) and the Czech Republic (55%). There were a total of 29 705 digital screens by the end of 2015, representing 92% of the EU’s total screen base. This is the same ratio already achieved in 2014.

More detailed information on European as well as international theatrical markets can be found in
FOCUS 2016 World Film Market Trends prepared by the European Audiovisual Observatory for the Cannes Film Market.