While national distribution markets have become more concentrated in recent years, some key players in the market have begun to expand their geographic scopes

15 major pan-European audiovisual distribution groups serve 68% of pay-TV homes in the EU. The sample of six groups in this report (Deutsche Telekom, Liberty Global, Orange, Sky, Viasat and Vivendi), accumulate 50% of pay-TV subscribers in the EU.

The three "multi-country" broadcast groups in this report (Central European Media Enterprises, the Modern Times Group and the RTL group) include the major players (in the top 4 regarding audience share) in 17 European countries.

There are 13 pan-European broadcasters who (directly or through subsidiaries) own the significant well-known channel brands and pay TV channels available throughout Europe. Nine of these are linked to the major US television and film production groups.

The geographical spread of distributors and their synergies in technology, and the existence of multi-country broadcasters, leads to the development of regional on-demand services.

The European Audiovisual Observatory has just published its first report on pan-European media groups on the basis of data gathered in the MAVISE database. This new 56 page report - Media ownership: towards pan-European groups? - is free to download here. Focusing on a selection of major pan-European groups in both the broadcast and the distribution markets, the report outlines some of the key players, their geographical footprint, their position in a range of markets, and their most recent strategies regarding expansion, acquisition and vertical integration. 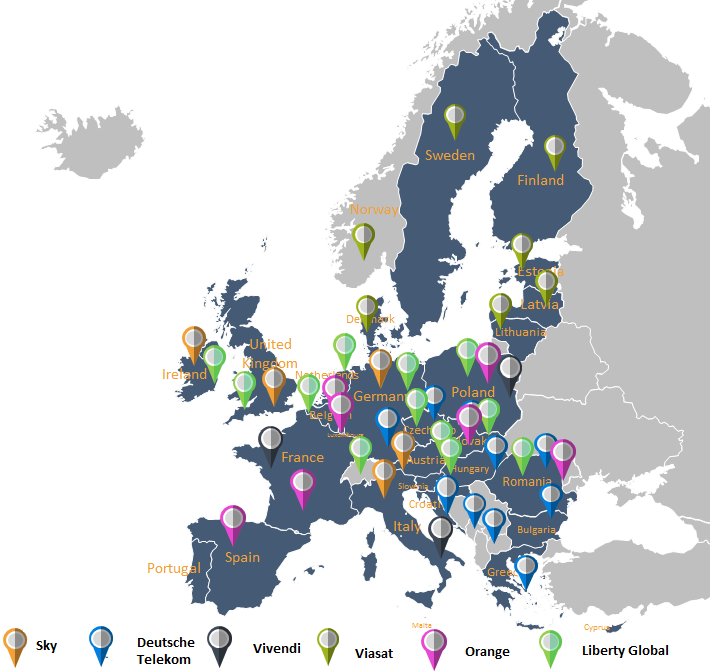 National distribution markets have become more concentrated between 2011 and 2014. Alongside consolidation at the national level, the market has seen players expand their geographical scopes, acquire major national players, and increased cross consolidation between telecommunications and cable companies.

Regarding the pan-European broadcast media groups, these can be distinguished between those with a "multi-country" broadcast strategy providing many important free to air channels, and those that have a more "pan-European" strategy with well-known channel brands available throughout Europe. Nine broadcasting groups are analysed in this report.

While TV audience markets have become slightly less concentrated between 2011 and 2014, from a sample of 30 European countries, the two main broadcasting groups gather on average 51% of the audience, and the 3 main groups 64%, with strong variations between countries. The three "multi-country" broadcast groups in this report include the major players (in the top 4 regarding audience share) in 17 European countries.