In the heart of the Moroccan desert, at the end of the 1970s, some French mine-clearing experts are hard at work. Suddenly, there’s an explosion... In a suburban house, the telephone rings. Nine-year-old Bazil sees his mother sobbing, the receiver in her hand... We see Bazil again as an adult, in a videoclub. When there’s an exchange of gunfire in the street, Bazil is shot in the head... He survives and has to live with the bullet lodged in his skull. Having lost his job, he ends up on the street. He is taken in by a group of larger-than-life ragmen: Remington, a black man who uses outdated expressions when he speaks; Calculette, who has a "talent" for counting everything in the twinkling of an eye; Fracasse, who absolutely wants to beat the record of cannon man; Placard, who survived the guillotine; the rubber Kid, a contortionist in love with Bazil and Tambouille, who has adopted them all, after losing her twin girls in the labyrinth of mirrors... Scavenging around for them, Bazil by chance one day finds himself in front of the headquarters of two companies: he recognises the acronym of the two arms manufacturers which caused his misfortune. With help from the group of oddballs and thanks to his "Tom Thumb" imagination, Bazil manages to turn the CEOs of the two companies against each other, in order to better destroy them.

What’s under the Christmas tree

European Distributors: Up Next! 2009 - Norway

A sensible lawyer and a suitcase full of cocaine in Borderline 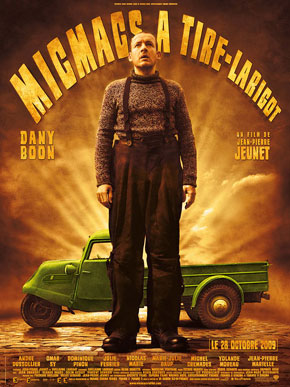