FATHER OF MY CHILDREN

Grégoire Canvel has everything a man could want. A wife he loves, three delightful children and a stimulating job. He's a film producer. Discovering talented filmmakers and developing films that fit his conception of the cinema—free and true to life—is precisely his reason for living. His vocation. It fulfills him and Grégoire devotes almost all his time and energy to his work. He's hyperactive, he never stops. Except on weekends, which he spends in the country with his family—gentle interludes, as precious as they are fragile. With his bearing and exceptional charisma, Grégoire commands admiration. He seems invincible. Yet his prestigious production company, Moon Films, is on its last legs. Too many productions, too many risks, too many debts. Storm clouds are gathering. But Grégoire plows on at all costs. Where will his blind obstinacy lead him? One day, he is obliged to face the facts. In one word: failure. He is overwhelmed by fatigue. Which soon, secretly, turns into despair.
Inspired by the last days of producer Humbert Balsam, and the consequences of his suicide on his family.

more about: Father of My Children

Father of My Children

The fascinating portrait of an auteur film producer whose life is in freefall. This sensitive and subtle work won the Special Jury Prize in the Un Certain Regard section at Cannes

“Cinema is a constant confrontation with the real world”

Cineuropa met with the young 28-year-old director in Paris to talk about the genesis of her second feature, The Father of My Children

Shoot about to kick off for Mia Hansen-Løve’s Maya

Louise by the Shore, in winter, in summer... and on and on through the years 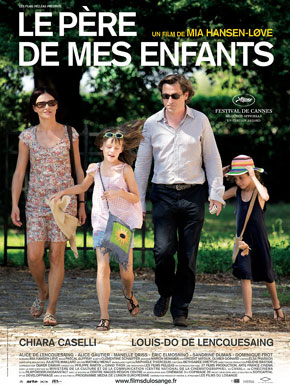