Only a river separates a small Polish border town from Germany. The local teenagers, are wide-eyed at their neighbours’ standard of living. Tomek is a good student, he’s interested in astronomy and plays football to please his father. Except that he lives in a little border town plagued by unemployment and poverty, whereas, on the other side of the river, lies Germany with all its relative affluence. When Tomek meets Marta at his first disco and falls in love with her, he starts to think up ways of earning money in order to keep her interested. After attempts to make some cash smuggling dogs, he approaches the pimp Borys who finds local boys for his German clients. Tomek has no idea of the brutal fate which awaits him.

To survive or sacrifice yourself according to Robert Glinski

The director of Hi, Tereska! and Piggies films his new feature, focused on a group of young people in the resistance during the German occupation

Kicking off today, this year’s edition of the Warsaw Film Festival is a special one. The event is celebrating its 25th anniversary and has also risen a level in the hierarchy of international...

The 44th Karlovy Vary International Film Festival concluded Friday with a raft of awards going to European films. Frédéric Dumont's Angel at Sea won the Grand Prix. A moving portrait of a boy...

Robert Gliński returns to competition at the Karlovy Vary Film Festival (July 3-11), where his latest film, Piggies is among the 14 titles vying for the 2009 Crystal Globe. The Polish director won... 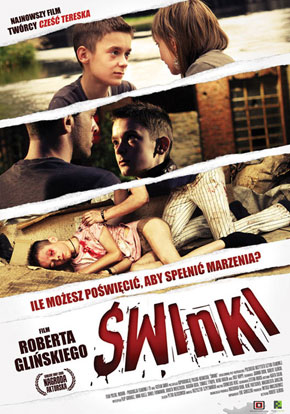