PIER PAOLO PASOLINI - THE REASONS FOR A DREAM

This is the poet I knew, consciously or not. One thing is sure, I knew him better than I thought I did, much better. But that is something you find out only after the event. It is much more difficult to be aware during. Often, you really don’t want to know. After, when you hear "his" words spoken by assembly line robots who pass for men, albeit slightly deaf and sharp-eyed ones, or by kids determined to change the world at any cost... Senses that reject Pier Paolo’s words brutally, or accept to go into or out of the desert with him... into or out of the sun with him... you end up wanting for him to be yours, and alive, because "I know" and have learned.
I made a film dreaming that Pier Paolo’s words were immersed in all that no longer concerns him, like our worldly, assertive and shrill democracy; the artifice of pretending to understand; a surreptitious defence of culture that cultivates the masses... low brow, toadying, penetrating and with a powerful and voracious ability to assimilate.
I have made a film in which I am absolutely certain of his incomparable and extraordinary irony in the way in which he shrugs off the burdens of blessed and approved horror, but also the immensity of his love for the victims, that comes close to being poetic. A delicious smell...
I have made a film – I still don’t quite know how it happened – because I wanted to see where he really is. Thisis a film, but also a healthy delirium.
All this may well be part of one of my secret recipes where you mix the ingredients, cook them over a low flame and don’t forget to add the chili powder,... Just like the Poet used to say.
(Laura Betti) 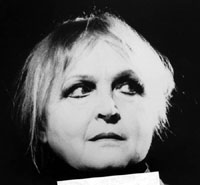