Ender and Çetin – both in their late thirties – have been friends since they were at school together. Çetin has been away for many years. Now he has returned to Ankara and has moved in with Ender, just as the friends always imagined they would. Their best friend, Fikret, who lives in Germany and is spending his holiday in Turkey, is involved in a traffic accident which kills both his parents and leaves him injured. When the time comes for him to return to Germany, he asks Ender and Çetin to let his sister Nihal move into their all-male flat share. Reluctantly, the two friends comply with his wish. In the beginning the young woman’s presence irritates the two guys, who think of her as an intruder. Nihal is deeply traumatised by the loss of her parents and refuses to have anything to do with the two men. After a while, however, a certain familiarity develops between the three young people...

more about: Our Grand Despair

Turkey remains one of the key destinations in the map of German company unafilm. Seyfi Teoman’s Saints is set to shoot this autumn

Linz is hosting the 8th Crossing Europe Festival (April 12-17), which kicks off today. The week-long annual event, generously backed by the European Union’s MEDIA Programme, turns the city into...

Pina and other high-profile co-productions at Istanbul fest

Some things are best left unsaid in Our Grand Despair 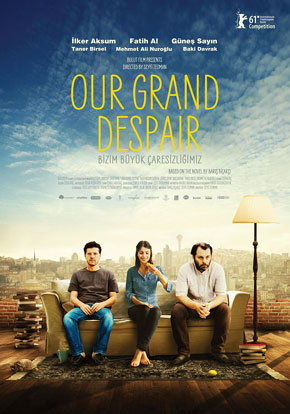