THE SNOWS OF KILIMANJARO

Although he has lost his job, Michel lives happily with Marie-Claire. They’ve been in love for 30 years, are fulfilled as parents and grand-parents, have close friends and are proud of their trade union and political battles. This happiness is shattered along with their French window when two young armed and masked men hit them, tie them up, pull off their wedding rings and make off with their credit cards. Their distress is all the more acute when they find out the attack was organised by a young worker made redundant at the same time as Michel. However, they gradually discover that their attacker, Christophe, only acted out of necessity: he lives alone with his two little brothers and does an admirable job of looking after them, attending to their education and health. Their mother left them to live her own life and they never knew their father. Michel and Marie-Claire thus decide to look after the two little brothers while they wait for Christophe to be released from prison.

more about: The Snows of Kilimanjaro

The Snows of Kilimanjaro

Class consciousness, poverty and generational conflict under the Marseilles sun. A politically-engaged and warm-hearted film by Robert Guédiguian, unveiled at Cannes. Finalist for the Lux Prize 2011.

"Encourage people who have courage to remain courageous"

“My films reflect where I am”

Venice and Toronto on the horizon for MK2 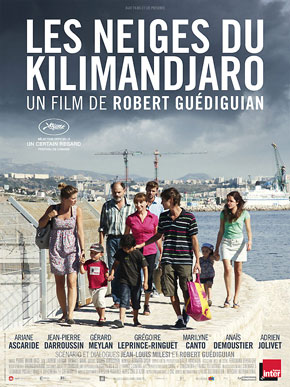