Establishing a bleak village in Eastern Turkey as its setting, Sivas features the story of Aslan, an eleven-year-old boy, and Sivas, a weathered fighting dog who develop a strong relationship after Aslan finds Sivas wounded in a ditch, left to die. Meanwhile, a school play dominates the background as Aslan is disappointed in losing the role of the prince to Osman, his rival-in-love and son of the village head. While Osman gets ahead in the two boys’ race to win the hand of Ayse, the “princess” of the village, Aslan tries to impress her with his newfound friend. And Sivas, having found a new lease on life, wins one fight after another, strengthening Aslan’s hand. However, as Sivas’s success attracts more attention by the village head, the roles change and Aslan finds himself in an unexpected crashcourse into adulthood, leaving the princess behind.

A rite of passage named Sivas

VENICE 2014: The lead of director Kaan Mujdeci’s first film is an eleven-year-old and his huge Anatolian shepherd dog

Filmatique.com, a new platform for US audiences

A new online film-streaming site has been launched in New York, specialising in up-and-coming directors and arthouse cinema; titles include Short Skin, Sivas, Eat Your Bones and Modris

The feature debut by Turkish director Kaan Müjdeci and As I Open My Eyes, the first feature by Tunisian filmmaker Leyla Bouzid, have won five out of the eight awards at Cinémamed

Son of Saul triumphs at Manaki Brothers in Bitola

The other winners at the 36th International Cinematographers' Film Festival Manaki Brothers include Macbeth, Land and Shade, Montanha and Sivas

Sarajevo competition to include Son of Saul, The High Sun and The Treasure

The Sarajevo Film Festival has announced its feature and shorts competitions, as well as the In Focus programme 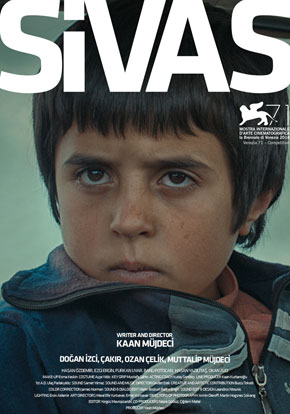