Some resemblances are disturbing. That between a guillotined viscount, pipe in his mouth, during the Terror; an army chaplain with a tattooed chest like a gangster, baptizing soldiers, looters and rapists, as if on an assembly line; a Parisian tramp flattened by a steamroller, and the highly educated concierge, but also arms dealer, of a large apartment block. A building where the lives of nearly all these characters intersect, except for the homeless who are roughly dragged from one place to the next by the police. And yet in the midst of all this chaos, there are spaces to dream, love stories, firm friendships that perhaps allow hope that tomorrow will be better than today.

LOCARNO 2015: The latest irreverent film of Otar Iosseliani, a naturalised French Georgian director, is in the running for the Golden Leopard at the Locarno Film Festival

There are 21 features, including eight directed by women, and an impressive delegation of artists on the cards for the 21st edition of the event organised by UniFrance 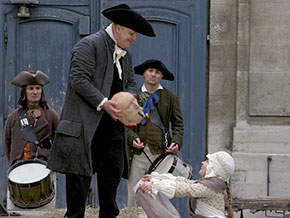