Sandro Micolucci, known as Ray Sugar Sandro, is a 50 years old (even though he doesn’t look his age!!!) showman from Abruzzo. He’s a complete artist: he devoted himself to singing, acting, directing, and he also likes photography, artistic nude, painting and poetry. He is surrounded by many friends, some of them also “brilliant” (like the bizarre Gerry) and his father and his brother are still an important part of his life. Gerry is a bold man (actually his head looks like a knee!) and he has a thick white beard. He is often with Ray during his shows and he usually presents the performance. We have followed Ray in his concerts, his trips, his passions and his loves. He has also taken part in many television programmes such as “Strafactor” and, at the top of his career, he has recorded his new song “Hello God” in Festival of Sanremo. But we’ll never know if Ray will be able to reach his purpose: to take the stage at the famous Ariston Theater in San Remo. Infact,, during a photo shoot in Abruzzo,in which Ray’s going to propose his personal version of the Da Vinci’s “Vitruvian Man”, he’ll take the semblance of a donkey, the emblem of stubbornness and multifaceted funcionality. This transformation coincides with the beginning of a new narration: Ray as a donkey. The animal, after several adventures and troubles, and after having been exploited by a dilapidated local circus, will find in Desiderio, a magic character – similar to a scarecrow – a creature he can trust. Ray, as a donkey, relies on Desiderio to realize his new and last will: learning how to fly. 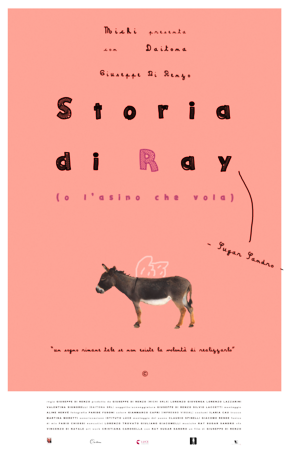