More than eighty years ago a girl was born into a poor farming family in Tuscany, and named Ultimina—“the last one”—though in fact she was followed by a younger sister. Now Ultimina lives alone on the old farm. In between visiting the cemetery, harvesting the garden, and working around the house, she takes time to talk to the filmmaker about her life. The decision to focus exclusively on Ultimina and not have anyone else in the film is highly effective: she gets all the attention she deserves. Ultimina is an animated and expressive storyteller. She shows some old photos and reminisces about how tough her life has been. In winter the children would have to herd sheep in the bitter cold. Later, it was her brother who got to decide who she could dance with. She married young. Her husband drank and her father-in-law hit her. Ultimina is still angry about how the men made all the rules. She uses a cane now to get around, but that does nothing to detract from her energy and rebellious nature. An eloquent portrait of a strong woman, and an equally eloquent portrait of an era.

To savour this documentary by Jacopo Quadri, viewers need to relax into the pace of rural life of times gone by and breathe in time with a proud-spirited woman 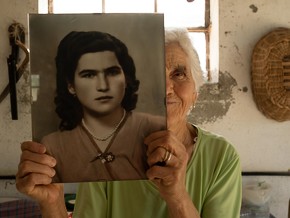