THE TASTE OF OTHERS

Three men, three women, opposites, possibilities, and tastes. Castella owns a industrial steel barrel plant in Rouen; Bruno is his flute-playing driver, Franck is his temporary bodyguard while he negotiates a contract with Iranians, his wife Angélique does frou-frou interior decorating and loves her dog. The conventional Castella hires a forty-year-old actress, Clara, to tutor him in English, and he finds her and her Bohemian lifestyle fascinating. Is this love? What would she say if he declared himself? Through Bruno, Franck meets Manie, a barmaid who deals hash. They begin an affair. Are they in love? They joke about marriage. As the women hold back, the men must make decisions. 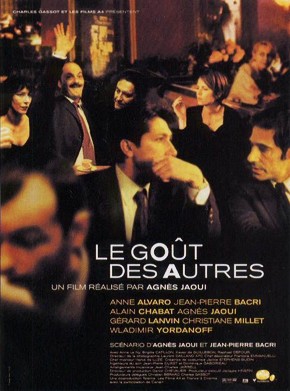