“Most of Orson Welles’ drawings are escapes from cinema”

09/05/2018 - CANNES 2018: We spoke to Northern Irish director Mark Cousins, whose new documentary, The Eyes of Orson Welles, is premiering as part of Cannes Classics 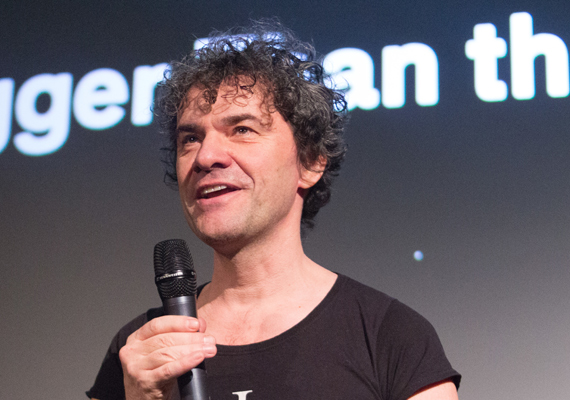 Film scholar, critic and director Mark Cousins has built his brilliant reputation on taking alternative looks at film history. His book and subsequent 15-hour documentary The Story of Film is essential reading and viewing for anyone interested in the history of world cinema. In The Eyes of Orson Welles [+see also:
film review
trailer
interview: Mark Cousins
film profile], a British production premiering as part of Cannes Classics, the Northern Irish filmmaker dives deep into the visual world of Orson Welles, having been granted exclusive access to hundreds of private drawings and paintings by the legendary director. It’s the second time the Edinburgh-based helmer has had a film at Cannes, following his 2013 personal and poetic essay A Story of Children and Film [+see also:
trailer
film profile].

Cineuropa: Can you tell us how you became aware of this box of drawings and doodles by Orson Welles?
Mark Cousins: Welles’ daughter Beatrice told me about them. We met at Michael Moore’s Traverse City Film Festival; she had seen The Story of Film and some of my other work, and she asked me if I would do something on her father using his drawings and paintings. His work is scattered around the world: Steven Spielberg owns one of the pieces, and certain universities own others. Beatrice told me about a box of stuff stored in a temperature-controlled room in New York. The film came to be about a box of secrets, which is really attractive because I focused particularly on the work in the box.

How much did you know about Welles before? Did you have to do a lot of new research?
I was taught about Orson Welles by Professor Graham Smith, who was one of the first people to look at the rough cut of this film, during my undergraduate degree in Film Studies. I had read not all the books, but the key texts, such as the André Bazin book. I updated my knowledge, too: there is a very good book called Orson Welles in Italy, and another one I liked was At the End of the Street in the Shadow: Orson Welles and the City. In particular, there is a book by Patrick McGilligan, Young Orson: The Years of Luck and Genius on the Path to Citizen Kane.

How do you see the drawings and pictures created by Orson Welles in relation to his films?
The pictures feel like a different thing. There is no obvious connection between the drawings and the films, except where some of the drawings are designs for his movies. Most of them are escapes from cinema. They are Orson Welles creating and doodling when he doesn’t have a camera in his hand, so in some ways, you can argue that the drawings are pulling against his career as a filmmaker. Yet there is a deeper level at the core, and that’s where I try to get to at the end of the film; there’s a connection between how the visual mind works and things like one’s graphic sense of the world. What sort of image pleased Orson Welles? Was it a composed image, or was it a detached image?

Did making this film change your view of his films?
One of the things that interested me the most when I was making this movie was that some of the less well-regarded Welles films became more prominent – titles like Mr. Arkadin and Macbeth, which I now think is one of his greatest films because it’s one of the works that are more directly connected to his unconscious imagination and his unconscious sense of what works visually. We know why those films were criticised because they don’t make psychological sense or literal sense, but boy do they make visual sense! They are works of expressionism and experimentation, and primal products of the visual imagination, the frontal cortex of Orson Welles.

Marc Baschet • Chairman, Bridging the Dragon
“The biggest challenge is to make films that reflect each country’s culture, without being a ‘mishmash’ of cultures”

Cécile Salin • Distributor, Diaphana Distribution
“I’m more worried about the repercussions the pandemic will have in the following years”

Antoine Le Bos • Founder and CEO, Le Groupe Ouest
“Storytelling is an art form that any human should master”

Marie Nilsson • CEO, Mediavision
“It will be interesting to see what happens in the autumn/winter window”

Luis Apolinario • Distributor, Alambique
“We need to fix the market in the long term”

The actors’ agent has taken his first turn behind the camera with a family drama recently unveiled at the 11th D’A Film Festival in Barcelona
Marc Baschet • Chairman, Bridging the Dragon