04/07/2018 - KARLOVY VARY 2018: Cineuropa met up with rising Czech filmmaker Adam Sedlák to talk about his minimalist civilisation horror Domestique, its influences and working with a low budget 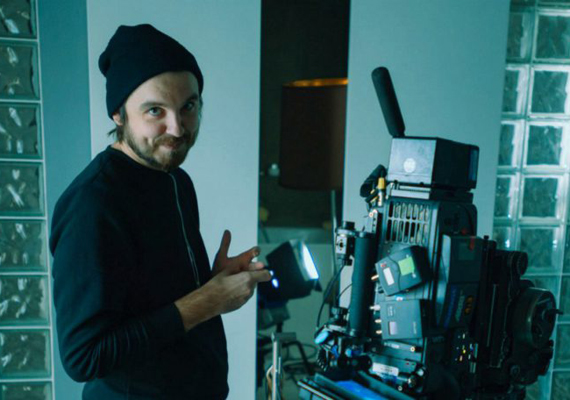 Adam Sedlák is an emerging Czech filmmaker who has shot several shorts and was nominated for an Award for Best Student Film for his graduate project, L.H.. He made a successful web series, Semestr, which takes place solely on the desktop of a computer. Domestique [+see also:
film review
trailer
interview: Adam Sedlák
film profile] is his feature-length debut and is screening in competition at the Karlovy Vary International Film Festival.

Cineuropa: Before Domestique, you garnered critical acclaim and recognition for your online series Semestr. Did this success help to launch Domestique?
Adam Sedlák: Actually, the script for Domestique was completed before Semestr. At one point, we hadn’t received the necessary funds for the film, so we invested our time and energy in Semestr. After its success, a number of doors opened, and we put our foot in them. And this time, it worked out.

You also made a student film, L.H., inspired by a bizarre yet true story, and that film is quite different to Domestique. Is there any influence whatsoever that can be traced back to L.H.?
I don’t think so. L.H. is a film that came about in a school environment through an assignment, and with only one purpose – to graduate. It was just a school exercise – nothing more, nothing less.

The script for Domestique won an award at Film Foundation in 2015. Have you made any changes to the script since then?
We won the Film Foundation Award at the very beginning. At that time, we didn’t have a single euro. The winning script was version number two; while shooting, we used version number seven. So sure, the script has changed – most notably the ending – as we were looking for the best way to express what I wanted throughout the various different versions.

During a project presentation, you emphasised the fact that the film was low-budget. Why?
We were at a pitching forum where we did not mention this fact, and we found out that it was a mistake not to reveal the financial circumstances that the project originated in. People are under the impression that the film must have cost much more, and then they are pleasantly surprised to learn the actual budget.

How did the financial constraints influence the project?
I wrote the script with the intention of the film being low-budget. I didn’t think of those constraints as a weakness; on the contrary, I considered them strengths. Conceptually, I knew that the story would take place in a single apartment with a pair of actors, and that it would be minimalist in style. Therein lies the power of our film, in my opinion.

Domestique seems like a minimalist drama, but you also frequently use elements of horror or its body-horror subgenre. Besides films taking place within four walls, like Roman Polanski’s “Apartment Trilogy”, what might be the other references that could have influenced Domestique?
During the preparation, we thought of Denis Villeneuve’s The Enemy, the Austrian horror Goodnight Mommy [+see also:
film review
trailer
interview: Severin Fiala and Veronika …
film profile], Andrzej Żuławski’s Possession and the physical films of Steve McQueen. A huge inspiration was Safe by Todd Haynes, which was slightly inspired by Chantal Akerman’s Jeanne Dielman.

Besides Polanski and Akerman, the social-horror context brings to mind Michael Haneke’s The Seventh Continent. Was this also a subconscious influence?
I guess so. We did not talk about it while preparing the film. I saw The Seventh Continent once, a long time ago. I did not think about it during shooting. But it is true that you could find certain similarities.

What led you to write a civilisation-horror script about obsession?
I believe that if anyone wants to do anything at the highest level possible, he or she is likely to neglect his or her partner or family. I find this symptomatic of our contemporary society, which is driven by success. You do not have to be a first-rate sportsman to find yourself in the situation depicted in Domestique. It is enough to try to be good at your job, because of which you spend more time anywhere else rather than at home. And this moment interested me immensely – when a man starts to forget the person closest to him.

Are you already pursuing any new projects?
I am currently working on an idea for my sophomore feature. I would like to shoot a film that is more accommodating to the audience. All I can reveal is that it will be about the relationship between youth and old age. Before that, I would also like to make a documentary about the 1986 Federation Cup. After the Olympics in Moscow and Sarajevo, it was the biggest sporting event to take place in the Eastern Bloc. But first and foremost, it was an unbelievable tennis match.

Ioanna Panagiotidou • Distributor, Rosebud.21
"It is easier to convince people to go to an open space so Greece has fewer problems"

Simon Ellis • Director of As Dead as It Gets
“If you have a new idea on set and deviate from the script, the whole house of cards might come tumbling down”

David Ilundain • Director of One for All
“We, the adults, do not know what really happens inside schools”

Michael Koch returns with A Piece of Sky