Cruel managerial role-play in Nothing Personal

"C’est mal, ô trahison, d’inspirer la folie en gardant la raison" (“It’s bad, Oh treachery, to inspire madness whilst remaining rational”): when a company manager sings this 19th-century song to his executives gathered together for a training evening in the form of a role-playing game, strangeness is the order of the day. With this intriguing, subtle and caustic opening tone, Mathias Gokalp’s Nothing Personal [+see also:
trailer
interview: Mathias Gokalp, director of…
film profile] screened out of competition on Thursday evening in the 48th Critics’ Week at the 62nd Cannes Film Festival.

Headed by an impeccable cast including Jean-Pierre Darroussin, Denis Podalydès, Mélanie Doutey, Pascal Greggory, Zabou Breitman and Belgium’s Bouli Lanners, this debut feature is held together by a formidable and rigorously-constructed screenplay (the script was co-written by the director and Nadine Lamari).

Divided into three parts ("The new one", "Married life" and "All together"), the film centres on the to-ings and fro-ings of eight characters: an incognito actor who converses with the executives judged on their abilities to "become more effective leaders", a boss about to sell his company who is secretly preparing a redundancy plan, a good-willed trade unionist who is overwhelmed by events, a woman manager who is anxious about failing the tests and supported by her lawyer husband, a company organiser in a difficult position due to her mechanic husband’s drunkenness, and a member of the cleaning staff who takes advantage of the confusion by disguising himself as a corporate executive.

Through tête-à-tête conversations that reveal secrets about the company’s future and the fragility of individuals, Nothing Personal weaves a web of comedy and sociological criticism of modern business. From caricatured managerial-speak, to career insecurity and prevailing cynicism (-"I know how to defend my territory" - "And in the event of a crisis?" - "I bite!" - "And what about the others?" - "What others? "), the film transforms its protagonists into pawns on a chess board.

But it also incorporates a good dose of delightful humour arising from the misunderstandings created by the role-play and conveys a certain fondness for the characters’ failings (tactlessness, doubt, disloyalty, lies…).

Filmed at the Musée des Beaux-Arts in Chartres, this enclosed drama repeats certain scenes, which are slightly different each time or offer viewers a wider understanding of the film as a whole. This rather virtuoso combination lightly touches on numerous themes which demonstrate the plot-writing skill of this 35-year-old director, competing for the Cannes Camera d’Or.

Produced by Karé Productions, Nothing Personal will be released in French theatres by Rezo, while international sales are being handled by MK2.

more about: The Ordinary People

Interview with the director.

The Belgian French Community Film and Audiovisual Centre (CCA) has just announced the results of the first 2010 session of its Film Selection Committee. Among the production funding recipients are...

From 19th-century England to modern business

While independent US films take centre stage in Belgian theatres this quiet week, with the release of new films by the Coen brothers and Jason Reitman (Juno), four European titles are also hitting...

Awarded, rather like the Golden Globes, to the best artists of French and Francophone cinema by foreign journalists based in Paris, the 15th Lumière Awards will be presented on January 15....

Twelve films are screening in competition at the 11th Bratislava International Film Festival (Nov 27-Dec 4), including five European titles and another three with European co-producers. Among the...

A coveted prize and benchmark of high cinematic quality, the Louis-Delluc Award will be presented on December 11 by a jury of around 20 film critics and personalities presided by Gilles Jacob.... 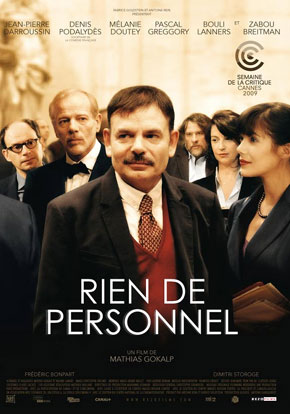