Les Beaux Gosses: Class in the middle of a hormone storm

Imagine Laurent Cantet’s The Class [+see also:
film review
trailer
interview: Carole Scotta
interview: Laurent Cantet
film profile] in the middle of a hormone storm, or a combination of the youth-oriented French comedy Ready for Love and Italy's Night Before the Exams [+see also:
trailer
film profile]. Add a pinch of student pranks and load on the irony and you get Les Beaux Gosses [+see also:
trailer
film profile], the debut film by French cartoonist Riad Sattouf, who creates his own personal adolescent universe with all the classic ingredients: awkwardness, jerking off, the obsessive quest for the “first time”, and all the times after that.

Produced by Les Films des Tournelles, Pathé and Studio 37 for €2m, this film had Directors' Fortnight audiences laughing until they cried at the adventures of Hervé (Vincent Lacoste) and Camel (Anthony Sonigo), two classic teenage lovers coming to terms with the opposite sex (and their own), their trademarks being a freakish 80s hairstyle, pimples galore, and utter naiveté.

“The hardest thing was finding the right actors. Our casting in high school after high school took three months,” said the director. “What we were looking for were kids with great faces. We weren’t after the Lolitas or the coolest of the cool, but striking faces that conveyed the sense of inadequacy so typical of that age. They had to look like my high school buddies, in short.”

Alongside the dozens of newcomers trolled for in the high schools, Les Beaux Gosses has its share of film stars as well, such as Irène Jacob, Emmanuelle Devos and Valeria Golino, who plays an entertaining, sexy mother in an Internet video that provides an outlet for the kids’ masturbatory fantasies.

With several cartoon albums about teenagers under his belt, for his directing debut Sattouf drew on his own personal history to produce an irreverent, ironic film. “It wasn’t my aim to make a generational film that would say this is what today’s teens are like. What I did was combine today’s teens with those I remember from my adolescence in the 80s”.

more about: The French Kissers

An advance on receipts from the CNC for Mikhaël Hers’ Amanda 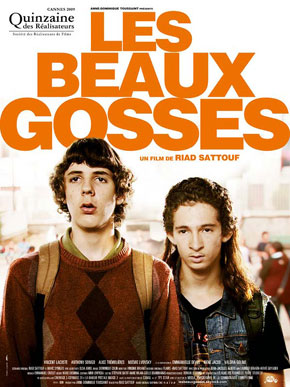