At 149 minutes long, A Prophet is captivating throughout and proves to be an extremely rich film, from its highly sophisticated screenplay (which was fine-tuned over three years by the director and Thomas Bidegain, based on an original script by Abdel Raouf Dafri and Nicolas Peufaillit) to its superb direction using a broad technical palette, the pace of its editing, the impressive work on the sound and its score composed by the talented Alexandre Desplat. This is all skilfully woven together by a director who is a master in the art of immersion and gives the narrative tension and pure "gangster film" action the density of well-crafted intelligence.

Set over a period of around five years, the plot traces the initiation and criminal rise of Malik El Djebena (newcomer Tahar Rahim), an 18-year-old French-North African boy sentenced to six years in prison for violence. Illiterate and with no family, as isolated behind bars as he was on the outside, the young man is forced to commit a murder ("Do you think you’re going to last long without protection?") on behalf of César Luciani, the Corsican godfather of the prison (an outstanding Niels Arestrup). From the workshops to the prisoners’ walks, the visiting room to solitary confinement, score-settling, dealing and going on leave, the film paints a documentary-like portrait of the everyday violence of prison life.

However, A Prophet focuses above all on the gradual emancipation of Malik, who learns how to read and write, makes friends (apart from the Corsicans who don’t really accept him and the Muslims who reject him), goes up in Luciani’s estimations ("You’ll be my eyes and ears") and sets up his own dealing network outside and inside prison, whilst going back to his Arab roots.

This rise in status is not without violence, but Audiard recounts it above all through the build-up of minimalist dialogues and mood-setting sequences, as well as two dreamlike scenes and even the regular apparition of a ghost. This combination makes A Prophet an unusual film characterised by the gradual blurring of life inside and outside prison, echoing the work of Audiard, who masterfully explores the boundaries of different cinematic genres.

more about: A Prophet

Interview: Jacques Audiard and Tahar Rahim - director and actor of A Prophet

"Prison as a metaphor for society" 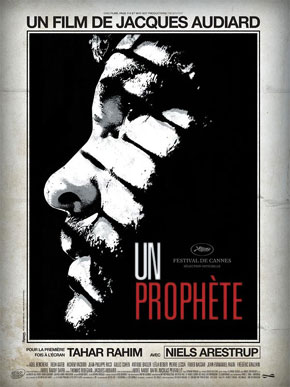