16/07/2009 - Gordos is a dramatic comedy which, through a host of characters trying to lose weight, explores problems that cause us to suffer from emotional overload

The first scene in Gordos [+see also:
trailer
interview: Daniel Sánchez Arévalo
Interview with Daniel Sánchez-Arévalo,…
film profile] clearly sets the tone: we are all – actors and viewers alike – going to lay ourselves bare, air our troubles, mistakes, quirks, contradictions and selfish ways. We will reveal our dissatisfaction, prejudices, guilt, phobias and betrayals.

In the manner of a self-help book, illustrated with five examples and stories, Daniel Sánchez Arévalo has written and directed a film which demands of audiences not only mental agility, effort and attention, but also the guts to digest the contents of this two-hour feature: a banquet that may upset more than their stomach.

A promiscuous, impulsive and odious gay TV sales presenter (played by a chameleon-like and mannered Antonio de la Torre) almost kills his partner and, feeling overwhelmed with guilt, starts living with the latter’s wife. A female executive puts on too much weight during her husband’s long absence, as if to feel comfortable when he returns. A plump teenager, with obese parents and a skinny twin brother, is bullied at school and home. A young, religious couple – she’s fat, he’s thin – have never had sex, despite their long-term relationship. A therapist (Roberto Enríquez) helps fat people accept themselves and improve their self-esteem, but can’t bear the fact that his own girlfriend (Verónica Sánchez) has put on weight due to a much desired, if complicated, pregnancy. All these characters make up the melting pot that Sánchez Arévalo uses, as in his award-winning debut feature (DarkBlueAlmostBlack [+see also:
film review
trailer
film profile]) and shorts, to get to the heart of the pain of complex human relationships.

However, in order to fit so many ingredients into the pot, one has to peel away the outer layers, with the risk of leaving certain elements of the plot underdeveloped and viewers hungry for more. Sánchez Arévalo is aware of this and doesn’t use (or abuse) emphasis, or insist on obvious points. However, at times the drastic changes in some characters need to be spiced up with more details so that the resulting dish is tasty and the diners – or cinemagoers – want to savour it.

All this, the boldness of the project, its narrative pace and the attempt to create a film full of depth, flavour and cinematic calories make it worthy of a star-rating in a hypothetical gastronomic-film guide.

To put together his recipe, Sánchez Arévalo has deconstructed conventional film form to serve up a bittersweet production for discerning tastes, those that recognise creative feats and don’t limit themselves to devouring cinematic fast food and mainstream treats. So much effort, preparation and development time (four actors had to gain weight “due to script requirements”) go into telling us that we all, however thin we may be, carry a fat person within us: we suffer from an overload of complexes, guilt, contradictions and fears.

Gordos looks at emotional obesity as a metaphor for the baggage we drag around with us, which we’re incapable of expressing or accepting and which our lives difficult. It also reveals that we’re stifled by a preoccupation with appearances, with how other people perceive us – this character that we create to step out into the street, to protect us, distances us from ourselves and we can end up living a sham. Because what’s important, the film concludes, is that we be free, reject labels and be comfortable with ourselves, whether we look fat or thin.

The director compete with Gordos, a smart, witty ensemble comedy that received a lengthy standing ovation

Gordos is a dramatic comedy which, through a host of characters trying to lose weight, explores problems that cause us to suffer from emotional overload

“For me, cinema is a form of therapy”

Spain’s Daniel Sánchez-Arévalo delivers a simple, likeable and heart-warming road movie, homing in on two brothers who struggle to understand one another 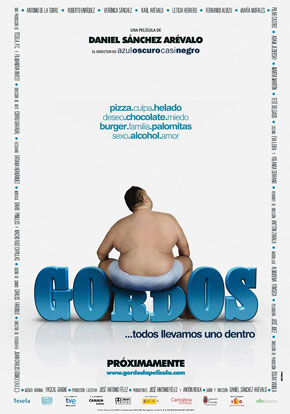