VENICE 2009 Out of Competition / Spain

[REC] 2 [+see also:
trailer
film profile] picks up where the first episode, [REC] [+see also:
film review
trailer
interview: Jaume Balagueró, Paco Plaza
interview: Julio Fernández
film profile] left off: the authorities have lost contact with the people trapped in the infected building where firemen had arrived in the middle of the night to free a woman stuck in her apartment. Angela, the reporter from the show “While You Sleep”, had tagged along with her cameraman Pablo.

A terrified Angela (Manuela Velasco) is now fighting for her life in the dark, trying to escape something trying to drag her off. A special SWAT team has just arrived on the scene to face a new night of horror. Along with the audience.

Jaume Balagueró and Paco Plaza, fast-rising talents of the fantasy genre, team up once more for the sequel-by-popular-demand to the film that became a runaway hit in 2007 after bowing at the Venice Film Festival. The two directors swear that the second episode was spawned by the audience of the first, who came up with suggestions and observations and noticed details of which Balagueró and Plaza were barely aware until the audience response opened their eyes. You could say [REC] “grew” thanks to the contribution of the horror film fan community (mainly Spanish, but not exclusively) until it “blew up” into [REC] 2.

With the first [REC] the two filmmakers had tried to shake up the genre. Balagueró had an acclaimed first feature under his belt, The Nameless (1999), a second film that was an even bigger hit, Darkness [+see also:
trailer
film profile] (2002) and an ‘American phase’, in horror, of course, with Fragile [+see also:
film review
trailer
film profile], while Plaza had won recognition in 2002 at his debut with Second Name, segueing into the horror thriller with Romasanta: The Werewolf, distributed worldwide in 2003.

Clearly, projects for an international audience that loves the kind of tales that scare the wits out of you, with all the gory details. Cinema that pays homage to the all-time horror meisters, from Tod Browning to George A Romero and Sam Raimi.

What made [REC] such a sensation was the directors’ decision to shoot the whole film with the digital television camera used by the TV crew that experiences the film’s bloodcurdling story firsthand, the idea being to involve the viewer and suck him or her into the scene by way of a fake TV news story. Original it wasn’t, considering the precedent set by The Blair Witch Project, but the effectiveness of “live” horror was inarguable.

The plot of the first episode wasn’t too original either, but it has evolved and acquired all sorts of clever twists in the sequel [REC] 2 (the English launch labels it "Fear revisited"). This time the eye behind the camera is multiplied: in the first part of the film the images reach us from the TV camera of a member of the SWAT team, Rosso (played by the cinematographer Pablo Rosso himself, who is obviously off-camera for every frame); later they come from a video camera wielded by three kids who have sneaked into the doomed building as a prank.

The shift in viewpoint gives the film a greater breadth than its predecessor, and even the script is somewhat more complex. The horrifying niña Medeiros who dominates the first episode here reveals all her monstrosity, in a crescendo of horror that nods to and outright loots the zombie sub-genre, the demonic possession tack and the endemic killer virus angle. Surprise ending that suggests a REC 3 is in the offing, with the virus from hell breaking out of the building…Forewarned is forearmed.

The film is set to open in Spain on October 9. In Italy it will be distributed by Mediafilm in January 2010.

In Óscar Martín’s début feature, Javier Botet learns the hard way that, sometimes, a friend is not a gift you give yourself but a two-legged rat with a dastardly plan

Review: The Queen of the Lizards

Can romantic comedy, science-fiction, transgression and an absurd sense of humour come together smoothly and harmoniously in a film shot in Super 8? The Burnin’ Percebes duo proves that they can

Four years ago, Filmax launched a little horror film helmed by two directors who up to then had only co-directed OT: The Film, about the Operation Triumph phenomenon. But [Rec] was no ordinary...

Cell 211 and Agora are major favourites for Goyas

For once (and may it be a precedent), the tastes of the Film Academy and viewers have coincided, judging by the nominations for the 24th Goya Awards, whose presentation ceremony will take place on...

Eight European productions and co-productions are hitting French screens this Wednesday, alongside two US films and an Iranian title, while not one French feature is in the line-up, which is very...

Verdone, Besson and Balagueró under the tree 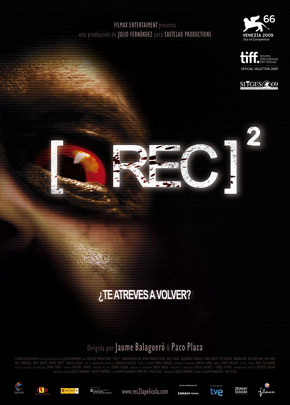