With its “aggressive” dialogues which mention the names of Italian political figures – in particular Alessandra Mussolini and Verona mayor Flavio Tosi, accused of intolerance towards Romanians – debut director Bobby Paunescu’s Francesca [+see also:
trailer
film profile] has caused a stir in Venice, where it screened in the Horizons section.

The story centres on Francesca (Monica Birladeanu), a young and idealistic Romanian nursery school-teacher who is about to leave for Italy, where she dreams of opening a nursery for the children of Romanian immigrants.

Her decision immediately arouses reactions from her family, partner and friends. Some, like her father, discourage her by referring to Italy’s racism – “they brought us into Europe so they could treat us like slaves and screw our women”. Others, including her mother, encourage her. And others still are undecided because they are too caught up in their own problems, such as her boyfriend Mita.

The director of Francesca, to be released in Italy by Fandango, wanted to compare the prejudices and viewpoints of those who set out in search of their fortune and those who should welcome them because they themselves are “half Italian, half Romanian”.

“I grew up in Milan and I also have future projects in your country”, Paunescu explained in Italian at a press conference. “And when Giovanna Reggiani was brutally murdered in Rome in 2007, I thought there were mistaken reactions on all sides. The Italians’ first knee-jerk response was to say 'let’s throw out all the Romanians', while the Romanians insisted on pointing out that the perpetrators were gypsies. I felt all of this on a personal level; I felt betrayed by certain comments, such as that made by Mussolini, who said that Romanians had rape in their DNA. I felt an urgent need to tell my own account of relations between the two countries”.

Indeed, the film doesn’t take sides: the Romanians’ actions are just as bad as the Italians’ words and attitude. The director commented: “Above all, I wanted to explore the identity crisis of my compatriots. My protagonists haven’t found their way in life but are full of energy and willingness; likewise, Romanian society hasn’t yet found its way, but I hope the day will come when the Italians are proud to welcome the Romanians”.

Encouraged in this project by his friend and colleague Cristi Puiu, another leading exponent of the Romanian “New Wave", who co-produced Francesca, Paunescu prepared the film by carrying out research which led him to discover that there are 1,700 Romanian companies in Verona and Italy is home to 1.4m Romanians: “We only hear about the serious cases in the news, but we can’t punish 1.4m people because of those 900 Romanians found guilty of various crimes”.

Pioneers’ Palace: A crop of new and interesting faces

Of Snails and Men

Everybody In Our Family

A black, sarcastic comedy about a family. A Berlinale 2012 discovery and new proof of the Roumanian new wave's vitality.

Everybody in Our Family capable of violence

Everybody in Our Family, Radu Jude’s follow-up to The Happiest Girl in the World has many of the characteristics the new Romanian cinema, but wraps them into a more violent story than is usually...

The Romanian National Film Centre has announced the winners of its 2011 funding competition. Ten features (of which three are debuts), three documentaries, three shorts and four animated films...

Placido to star in and co-produce Itaker, to be shot in Romania

Michele Placido will star in the new film Itaker, which he will also co-produce with leading Romanian production company Mandragora (Aurora, Morgen). Itaker is directed by Toni Trupia,...

The Transylvania International Film Festival has just announced the 12 first or second features that will compete for the festival's trophies. The ninth edition of Romania's most popular film...

The seventh edition of the Crossing Europe Film Festival kicks off April 20 in Linz, Austria with four opening films: Jasmila Žbanić's On the Path and Alexei Popogrebsky's How I Ended This Summer,... 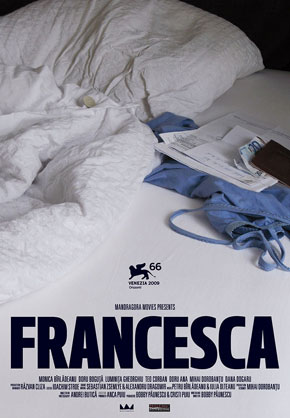