This is the strength of a second-generation Turkish-German director, who plays on the different "ethnic" qualities, to the point of creating quirky characters, but without crossing the boundary into the grotesque which descends into the ridiculous. Indeed, comedy is a difficult genre to handle in contemporary European cinema.

Essentially, Akin doesn’t tell us anything particularly new or original. Zinos (Adam Bousdoukos) is the young owner of the "Soul Kitchen" restaurant, which is going through a difficult patch. And, like a magnet, attracts all sorts of disaster. Within the space of a few scenes, he loses his much-loved premises, his girlfriend flies off to China to pursue professional dreams and he has health problems, as his back suddenly stiffens, with many doctors speaking of possible paralysis if he isn’t operated on immediately.

But his bank account is in the red and Germany seems to be like the US: without private health insurance, you don’t have much hope... And it’s precisely when you hit rock bottom, when things can’t get any worse, that life sometimes has surprises in store. Thanks to a brother on day release from prison (Moritz Bleibtreu), an idealistic cook (Birol ünel), a disinterested waitress who aspires to be a painter (Anna Baderke) and a physiotherapist passionate about alternative medicine (Dorka Gryllus)...

All this happens in a whirlwind of gags, touches of almost slapstick comedy (the funeral of the girlfriend’s grandmother and the Turkish butcher-like 'doctor'), adoring aestheticism towards food and its preparation. Akin offers us an unbridled storyline, without fear of exaggeration (although there are elements of this), with a sort of creative liberty in his direction, which is the true strength of this comedy verging on the zany.

Of course, there are glimpses of the director of Head-On and The Edge of Heaven [+see also:
film review
trailer
interview: Fatih Akin
interview: Klaus Maeck
film profile] in the bold choice of framing, which glorifies the food and people who enliven his restaurant and film – for example when a high-angle tracking shot follows a waiter through the crowd of diners, trying to carry three dishes to a table and it all ends up smashing to the floor.

This meticulous directorial approach uses a diverse cast of actors, including a particularly impressive comic duo who, if this were the US, could appear in other films: Adam Bousdoukos (who co-wrote the screenplay with the director), and Moritz Bleibtreu (German star of Oskar Roehler’s The Elementary Particles [+see also:
film review
trailer
interview: Franka Potente & Moritz Ble…
interview: Oskar Roehler
film profile] and Uli Edel’s The Baader Meinhof Complex [+see also:
trailer
film profile]).

The production team is equally diverse and dynamic, which could help the film sell across Europe (international sales are being managed by Match Factory). Soul Kitchen was co-produced by France’s Pyramide Productions, Italy’s Dorje Film and Germany’s Corazón International, with backing from the Hamburg Schleswig Holstein regional fund, the DFFF federal fund, the FFA, Nordmedia Fund and the German Culture Ministry.

We chatted to Transilvania IFF artistic director Mihai Chirilov about this year’s rather nostalgic edition, the perils of political correctness and the ever-changing appeal of new technologies

The German-Turkish writer-director is shooting his new thriller, which stars Diane Kruger in the lead role

Demimonde to duke it out at Montreal

Fatih Akin to be a guest of honour at Lecce

The Cut: the Armenian Genocide, as seen by Fatih Akin

The Cut to be cut from Cannes 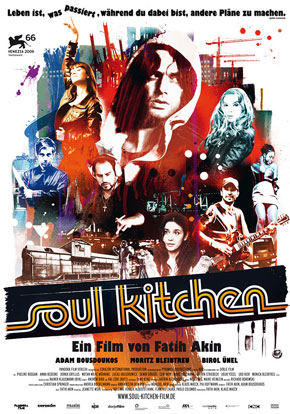