The first to realize that Romania’s Calin Peter Netzer was a great actor’s director was the jury of the 2003 Locarno Film Festival, which presented the Silver Leopard to the two stars of his feature debut, Maria. Six years after what became a triple win (the film also won the Special Jury Prize), Netzer’s talent is further confirmed in second film, Medal of Honor [+see also:
trailer
film profile], in competition at the Turin Film Festival.

The subject matter is that which many Romanian hits of recent years have tackled: mostly the impenetrable logic of bureaucracy, as well as the squalor of post-communist daily life (here, 1995 Romania) and great solitude. Ion (a monumental Victor Rebengiuc) is a lonely man, even though he wakes up every morning to his wife. Nina. But she has shut herself off in indifferent silence: one commiserating look from him is enough to curtail any attempt at conversation.

They also have a son, Cornel, but he lives in Canada and has never forgiven his father for having reported him to the police in an attempt to keep Cornel from leaving the country.

When the postman tells him that the government has sent him an official letter, Ion thinks they want to cut his already miserable pension. Instead, the Minister of Defence, 50 years after the end of WWII, is giving him the medal of honor of the title. But why? Ion has no idea, but he know it could be an opportunity to redeem himself in the eyes of his family, and thus digs through his memory to unearth possible anti-fascist deeds.

Far from the formal radical style of the other Romanian title at Turin, Corneliu Porumboiu’s Police, Adjective [+see also:
film review
trailer
interview: Corneliu Porumboiu
film profile], Netzer's film (written by Tudor Voican) is a dramatic comedy that has taken much from Italian neorealism – in particular, De Sica’s Umberto D., the father of all film portraits of old men humiliated by society – whose main strength is the performance of its extraordinary lead actor.

A Romanian/German co-production between Scharf Advertising and Pandora Film, Medal of Honor is sold worldwide by HiFilm and Pandora.

more about: Medal Of Honor

The international sales company from Munich presents 10 titles in Berlin, including one in competition

Everybody In Our Family

A black, sarcastic comedy about a family. A Berlinale 2012 discovery and new proof of the Roumanian new wave's vitality.

Everybody in Our Family capable of violence

Everybody in Our Family, Radu Jude’s follow-up to The Happiest Girl in the World has many of the characteristics the new Romanian cinema, but wraps them into a more violent story than is usually...

Bogdan Mustata (pictured), who won a Golden Bear with his short A Good Day for a Swim (2008), started the production of his first feature, Wolf. The shooting takes place in Bucharest and is... 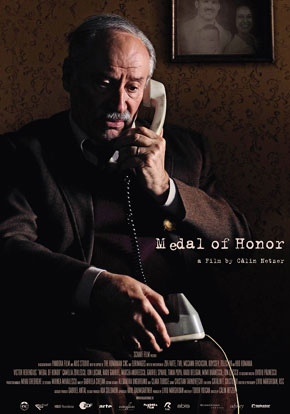