23/11/2009 - A promising debut feature co-directed by an Irish filmmaker and Romanian screenwriter, which won the Cineuropa Award at the 2009 Estoril Festival

Like the directors, Felicia’s life is also divided between the Netherlands and Romania. She emigrated in 1989 from Bucharest to Amsterdam, works in a library, is divorced from Marteen and is the mother of 11-year-old Marc.

After spending two weeks at her parents’ house in Romania, Felicia is ready to go home and be with her son, who has been in summer camp. But when her sister Iulia can’t take her to the airport as planned, the city traffic further forces Felicia to miss her plane and spend the afternoon with her mother in the airport. She hops from one airline company desk to another, among cafés and arguments, in the hopes of finding another flight for Amsterdam.

Her fear over not returning in time to pick up her son makes Felicia impossible and extremely surly with her mother who, with the few resources she has at her disposal, only tries to make herself useful and give her daughter good advice. The clash is inevitable, and what to her seems like her mother’s overbearing presence provokes aggression in Felicia. This will lead to a monologue in which the young woman vents all of her frustrations as a mother and a secretly dissatisfied immigrant who probably regrets the choices she has made in her life.

Thus re-emerge old resentments and frustrations kept in for too long in the family. Among shouting and tears, Felicia attacks and simultaneously asks forgiveness, she insults her mother and desperately begs for her help and understanding.

The film by Radulescu and Raaf depicts the inevitable misunderstandings between parents and children (that don’t seem to get resolved even after 40 years), as well s the indecisions and regrets of those who leave their families and their roots to find a new, independent serenity. In an era of young people’s mobility and immigration not always determined by financial difficulties but by the constructive desire to experiment a life lived elsewhere, Felicia is more than timely.

more about: First of all, Felicia

Interview with Melissa de Raaf and Razvan Radulescu, co-writers and directors of First of All, Felicia, Cineuropa Award winner at the Estoril Film Festival 2009

A promising debut feature co-directed by an Irish filmmaker and Romanian screenwriter, which won the Cineuropa Award at the 2009 Estoril Festival

Phil Parker and Răzvan Rădulescu have been confirmed as tutors for the first part of the workshop taking place in December; the application deadline is set for 29 October

The initiator of Bucharest’s NexT Film Festival has been selected by the European Film Promotion to take part in the Producers on the Move 2011 initiative.

“We have developed a strong industry side”

In 2011, the Transilania International Film Festival was accredited to FIAPF, making it one of the top 40 international competitive film festivals

Local film Shelter by Dragomir Sholev has won the 15th Sofia International Film Festival (SIFF), which ended Sunday night with an awards gala at the National Palace of Culture. The black comedy –...

Winner of two prizes at the 2010 Berlinale, Florin Serban's If I Want to Whistle, I Whistle has received a record number of nominations, 13, for the Gopo Awards, Romania’s film industry honours.... 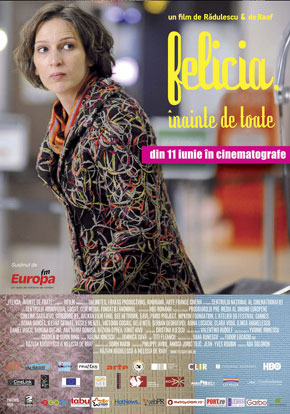