There’s a bit of everything in this epic film by Jaco Van Dormael, director of Toto the Hero and The Eighth Day. It draws on sci-fi fantasies of over 100 years of cinema, as well numerous films that have explored space and time in original ways, from Peter Howitt’s Sliding Doors to Tom Tykwer’s Run Lola Run and Michel Gondry’s Eternal Sunshine of the Spotless Mind.

But underneath the overdeveloped visual flamboyance of this mega-production (whose €50m budget was provided by Philippe Godeau and around 20 partners, including French TV companies, German film support funds, the MEDIA Programme, Belgian government and Canadian institutions) lies a beautiful love story, told using typical melodramatic stereotypes, which blends very convincingly with the theoretical meditations of Van Dormael’s screenplay on the different narrative levels of the non-linear journey through temporal space.

The film centres on Nemo (Jared Leto) who, at the age of nine has to decide whether to stay with his father or mother, due to their imminent divorce, and thus sees the whole course of his life change. In an endless series of flashbacks and flashforwards, Mr. Nobody recounts the infinite possibilities that open up in the protagonist’s life. These include the different love affairs he has or could have had with three women (played by Sarah Polley, Diane Kruger and Linh-Dan Pham), and the various and ever-changing events.

All this unfolds in a highly confusing narrative in which everything becomes blurred but in the end acquires meaning in the discovery of true love, thus closing the circle of life.

more about: Mr. Nobody

Belgian director Jaco Van Dormael talks about his most experimental film, Mr. Nobody

An excellent first weekend for The Brand New Testament

Daniel Marquet: "Van Dormael sold all over the world"

The Brand New Testament: Somewhere between Amélie, Brazil and Brussels 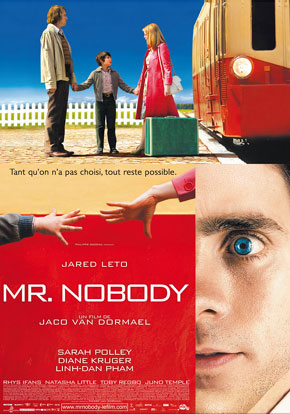