05/01/2010 - Gabe Ibáñez makes his directorial feature debut with a psychological thriller set on the Canary island of El Hierro. The film was selected for festivals including Cannes and Sitges

While Almodóvar chose the black sands of a Lanzarote beach as the setting for a pivotal moment in the conflict of Broken Embraces [+see also:
film review
trailer
interview: Pedro Almodóvar
film profile], Gabe Ibáñez opted for the volcanic aridity and sea depths of neighbouring island El Hierro [+see also:
trailer
interview: Gabe Ibáñez
film profile] to convey, with a torrent of fascinating images, the mental deterioration of a woman. María, who gradually sinks into madness, is played by the ubiquitous Elena Anaya, who won Best Actress at the latest Sitges Film Festival and has moved away from her sensual roles in Sex and Lucia [+see also:
trailer
film profile] and the upcoming Room in Rome (both directed by Julio Medem).

Ibáñez – helped by screenwriter Javier Gullón (King of the Hill) – makes us share feelings similar to those María begins to experience when, on board a ferry taking her across to the island of El Hierro, she loses her young son. In despair, she searches every corner of the boat for him, but the child is nowhere to be seen. She can’t believe it, it isn’t possible…How could something like this have happened?

When some time later the police tell her they’ve found the body of a boy, she goes to identify the corpse, but she assures them that it isn’t Diego. Feeling disturbed and depressed, she then wanders around the island looking for answers, gradually losing her mind.

This is a bold project undertaken by the 38-year-old Madrid-born director, a veteran of advertising, music videos and special effects, who previously explored the unusual potential of everyday situations and looked closely at the mental recesses closed off to reason in his only short, Máquina, which won a prize at the 2007 Clermont-Ferrand Film Festival. It was this work that attracted the attention of Telecinco Cinema’s directors, who asked Ibáñez to bring to screen a story that followed on from one of the biggest hits backed by the private TV network: The Orphanage [+see also:
trailer
film profile].

Once again it involves a mother, a missing son and a protagonist whose mind plays nasty tricks on her. But Ibáñez didn’t want to use the codes of horror film and opted for the evocativeness, whispering, silence and double meanings of psychological suspense, focusing more on the intangible and hidden than on powerful dramatic effects.

Therefore, the natural island scenes – deserted beaches, underwater depths, aquatic creatures and volcanic landscapes – play a fundamental role in fuelling, along with the addition of small details (some of which are almost imperceptible and many viewers perhaps don’t consciously notice them), the unease that takes hold of the central character and, by extension, the audience. This unhealthy and unreal atmosphere is underpinned by an expressive soundtrack, digital photography with dreamlike tones and the overall pace of a narrative that invites us to let ourselves be carried by the sensations without looking for an explanation: for there are vital moments and mental states that have no logic, but simply exist.

Ibáñez acknowledges his admiration for Kubrick, Polanski and Lynch, with whose nightmarish visions his work has been compared in reviews and blogs. But this modest director is merely content for his €2m production to take viewers on a journey to the island of El Hierro, which is more a mental than a physical place and is wholly disturbing through the eyes of his camera. The film, which had a seven-week shoot and a lengthy post-production phase, will be released on 100 screens in Spain. Wild Bunch is handling international sales.

Gabe Ibáñez makes his directorial feature debut with a psychological thriller set on the Canary island of El Hierro. The film was selected for festivals including Cannes and Sitges

“The devices of film are perfect for portraying madness”

A graduate in Motion Picture Sciences from Madrid’s Complutense University, Gabe Ibáñez has previously worked in special effects and advertising, and made a short film

The show is the first Starzplay Original International Series to be shot in Spain; the Maggie Civantos-starrer is being produced by The Mediapro Studio

After they worked together on To Steal from a Thief, the acclaimed actor-filmmaker is set to star in the new thriller by the director who specialises in suspense and action flicks

Cineuropa talks to Miguel A Faura, the Spanish producer behind films such as Hierro, Painless and Enemy, at the first edition of Brussels' Frontières Market

Autómata: robots shall not rule the Earth

Ibáñez, Bier and Kahn, amongst new competitors for the Golden Shell 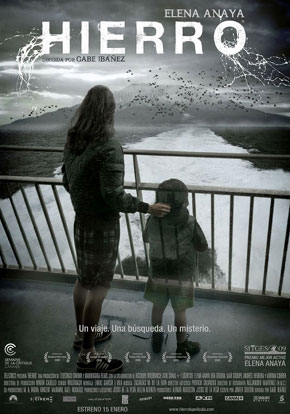