Soldini captures amour fou in What More Do I Want

“After Agata and the Storm I felt I needed to speak about reality from inside, not through invention. I wanted to take the camera and go inside,” said Silvio Soldini in introducing What More Do I Want [+see also:
trailer
film profile], his second feature film to screen at Berlin (after Burning in the Wind [+see also:
trailer
film profile], in competition in 2002), in the Berlinale Special sidebar.

Following the upper middle-class characters of Days and Clouds [+see also:
trailer
film profile], the characters here are from a more modest social milieu. The Milan-born director also returns to his native city — in which he hadn’t worked since another difficult love story, A Soul Split in Two (1993) — for a story about being torn between passion and everyday life.

“Talking to audiences after the screenings I realized that people like feel their stories are told, it’s like knowing the characters, they’re similar to you and the people you know. I wanted to tell a story of men and women who live in your house, that was real and possible, and to offer identification with them, not only a perspective from above to below”.

Anna (Alba Rohrwacher) pretty much has it all: a modest but secure accounting job, a solid albeit route relationship, an apartment and life-long friends. One day she meets Domenico (Pierfrancesco Favino), a married man with two children, and sparks fly.

Soldini skillfully describes everyday life in Italy, hardly ever seen in recent domestic films, made up of big apartment complexes and shopping malls, strong family ties, duties and habits. Resorting to numerous lies to their partners, Anna and Domenico can squeeze in just one weekly, four-hour rendezvous in a motel. Soon, however, she’s dreaming about something more and their balance is broken.

The birth of a hidden love that is intense and often violent is captured by the director with a psychological subtlety and humanity that balances out the plot’s stereotypes (the good husband, the boredom of long-term relationships, the warm but intrusive Italian family). Soldini further shows, without judgment and with great compassion for his characters’ situations, the difficulties in accepting family responsibilities and facing one’s emotions.

“The story is specific but also paradigmatic, and the few scenes in which the two are together shows how difficult it is for them to see each other,” Soldini told Cineuropa. “I wanted to show how family life influences the conception of love. In order to stay close to the characters, I shot with a hand-held camera”.

Shot in Cinemascope, the film took three months to edit and many rehearsals, to create the most realistic relationship possible between the characters.

A co-production between Italy (Lumière & Co.) and Switzerland (Vega Film and RSI – Radiotelevisione Svizzera), What More Do I Want will be released in Italy on April 30 by Warner Bros.

more about: What More Do I Want

Silvio Soldini to hit screens in September with Emma

The new film by the director of Bread and Tulips is toplined by Valeria Golino and Adriano Giannini; the Italian-Swiss production will be distributed by Videa

The Commander and the Stork: a tale on corrupt Italy

Silvio Soldini’s third comedy, starring Valerio Mastandrea and Alba Rohrwacher, will be coming out in Italy on October 18

Two prizes and a Palme for Pyramide 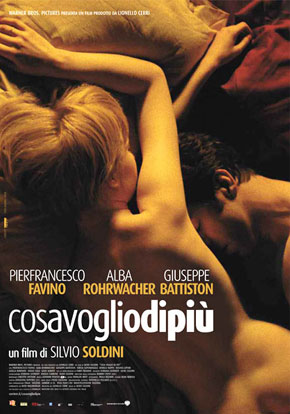