A Family overwhelms Berlin with emotion

A Family [+see also:
trailer
film profile], the third feature by Pernille Fischer Christensen (who won two awards at Berlin in 2006 for A Soap [+see also:
film review
trailer
interview: Lars Bredo Rahbek
interview: Pernille Fischer Christensen
film profile]), which was among the last titles to be presented in competition, had an unusually strong emotional impact at the press screening, where many tears were shed. Eyes continued to glaze over, including those of the film’s team, at the conference that followed.

With unparalleled veracity and humility, A Family portrays a family of bakers through the generations, centring on the illness and decline of a father of four children from two marriages, Rikard Rheinwald (Jesper Christensen, who lost 16kg for the role, over the six-week shoot), with a particular focus on his relationship with his daughter Ditte (Lene Maria Christensen).

Whilst exploring some of the recurring themes of this 60th Berlinale, namely family and the choices associated with it, the film sublimates them by sketching, thanks to the sensitive, naturalistic camerawork by Jakob Irhe (who came to the director’s attention for his work on Joachim Trier’s Reprise [+see also:
film review
trailer
interview: Joachim Trier
interview: Karin Julsrud
film profile], as well as for his documentary experience), the ineffable contours of unconditional love.

Ditte, who is nevertheless ready to abort the child by the man she loves for professional reasons, doesn’t hesitate in cancelling everything for her father, whose main concern is the continuity of his bakery (bread becomes, moreover, a metaphor for the very substance of life).

The characters, who are all equally important and depicted in all their fragility with an intimate but never invasive accuracy (which includes a careful observation of their bodies – faces and gestures), draw all their strength and sense of identity from their family, their home (the bakery, incidentally, is never shown). The choice to use cinemascope was deliberate: Fischer Christensen didn’t want to leave anything out of the image and to fit the whole family into the frame.

A Family is more than the story of a family, it’s a universal "families, I love you". That was the idea: Pernille (in collaboration with brilliant and prolific screenwriter Kim Fupz Aakeson, who also penned the Norwegian film in competition, A Somewhat Gentle Man [+see also:
film review
trailer
interview: Hans Petter Moland
film profile]) wanted to talk about all families in a gentle way that puts us at ease, "like a cuddle", which led her to include an opening in the form of a family album with hand-written captions.

Indeed, through her film’s cinematic language and honest subject matter, the director manages to strike that chord, in each us, of a love so immense it is indescribable, the overwhelming love that binds families.

more about: A Family

“If it hadn’t been for Pippi, I wouldn’t be a director”

Astrid Lindgren to be honoured with a Nordisk Film biopic

Hans Petter Moland’s competition entry, In Order of Disappearance, has now been sold for distribution in more than 40 territories

Berlinale: Someone You Love, a rock star discovers love

After The Hunt and Nymphomaniac, Wiedemann becomes headmaster

With 16 nominations, A Family leads the race for Denmark’s Roberts

Glasner films love on the run in icy Norway 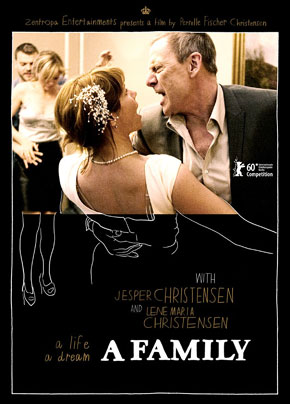