A multi-faceted genius and one of the most enigmatic figures in the history of Polish art and literature is the focus of Jacek Koprowicz’s Mystification [+see also:
trailer
interview: Jacek Koprowicz
film profile], which marks the director’s return to cinema after a 20-year break (after Medium in 1985 and Alchemik in 1988).

Playwright, philosopher, novelist, painter and photographer, Stanisław Ignacy Witkiewicz (1885-1939), known as Witkacy, was a member of the avant-garde Formist group and creator of the aesthetic theory of Pure Form. Although he never sought fame during his lifetime, he was nonetheless very well-known in the Polish Bohemian world. He was only recognised as an artist of stature by the general public at the end of the 1950s.

But most mysterious of all are the circumstances of his death. According to the official version of events, Witkacy committed suicide in a field in the village of Jezior, in Polesia, after hearing on September 18, 1939 that the Soviet Army had crossed the Polish border.

But his muse and lover, Czesława Oknińska, who had attempted suicide with the artist, changed her account several times in the years that followed. And alternative theories on Witkacy’s death abounded, further fuelled by the fact that when his presumed body was exhumed in 1988, it was found to be that of a 30-year-old woman.

Korpowicz’s film presents a theory of events arising from several years of research carried out by the director. He believes that Witkiewicz faked his own suicide, returned to Poland and hid at his lover’s house until his death in 1968.

Set in the 1960s, the film follows a student, cooperating with the Communist regime’s secret services, who finds trace of the writer. The Communists are all the more interested in his investigation as they are looking for a way to distract the population’s attention from another mysterious death, that of writer and parliament member Jerzy Zawieyski.

Moreover, correspondence written by Witkacy still circulated in the 1950s, and even 1960s, for the artist was in the habit of writing letters and postcards dated in a distant future and asking his friends to send them at specific moments. The student thus retraces the trail.

Mystification doesn’t just look at Witkacy’s mysterious death, but also at the working mechanisms of the Communist regime with its games of lying, concealment, hypocrisy and humiliation.

A large part of the film centres on Witkacy’s lover, who is completely devoted to the artist, prepared to yield to his selfish and despotic ways, all his perverted whims, whilst battling a brain tumour that often drives her to the brink of madness and fighting to claim her place as the (married) artist’s main woman.

One of Mystification’s strong points is the performance of its cast, including a famous duo of actors. Witkacy is played by actor-director Jerzy Stuhr and the student by Maciej Stuhr (literally transformed for the role). Czesława Oknińska is portrayed by Ewa Blaszczyk, who makes an impressive comeback in a leading role.

Mystification was produced by Yeti Films for €2.1m. which included co-production backing from Wytwórnia Filmów Dokumentalnych i Fabularnych, Piramida Film, Film Factoryet and Hydra Film, as well as €750,000 from the Polish Film Institute. It will be released domestically by Syrena Film.

The supreme art of lying

The Polish Film Spring in the Netherlands ready to blossom

Scheduled to unspool on 25 and 26 April, the event will honour director and actor Jerzy Stuhr 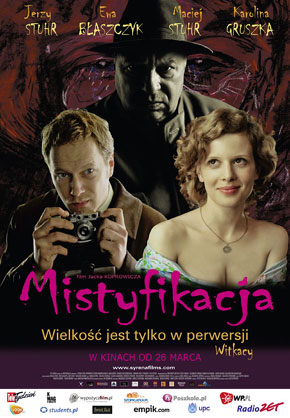