23/03/2010 - A harsh social drama about guilt and parenthood, in his darkest film yet Thomas Vinterberg tries to recapture the simpler, more straightforward filmmaking of his earliest work

Danish director Thomas Vinterberg – who shot to stardom in 1998 with the first Dogma film, Celebration – returns to a harsh Danish family drama and straightforward storytelling after a few English-language hit-and-misses. Shown in competition at the latest Berlinale, Submarino [+see also:
trailer
interview: Thomas Vinterberg
film profile] has been picked up for France (MK2), Benelux (Cinemien), Italy (Mikado), Spain (Golem), the former Yugoslavia and Japan (Bitters End), among others.

The weight of fatherhood and the importance of sibling relationships when nothing else is left are the main themes of this bleak social drama set in a no man’s land Copenhagen. The film is a meticulous adaptation by Vinterberg and Tobias Lindholm (first-time scriptwriter here, who then directed the striking prison film R) of the acclaimed novel by Jonas T. Bengtsson. It centres on two brothers who are neglected as children by an alcoholic single mum and never quite recover from a childhood trauma.

The first part of the movie, on the brothers’ early teens, is a prologue to their adult lives, described in two separate and subsequent parts. The opening scene – a tight close-up of the christening of the boys’ baby brother under the white sheets of a bed – has a dreamlike, magical feel meant to stress the purity of childhood even in the toughest of circumstances.

Left alone with their baby brother while their mother is out on a booze run, the boys still manage to survive despite their squalid and deprived environment. But lacking adult supervision, they play grown-up games that inevitably turn into tragedy for the baby brother.

An abrupt fast-forward takes the audience 20 years later to another squalid setting in Copenhagen, the shelter where 30-something Nick lives alone after having spent time in prison for acts of violence. His only mission in life – apart from finding booze to forget about his hopeless situation – is to reconnect with his younger brother. He hangs out with the overweight, mentally disturbed Ivan for whom, in a bizarre way, he feels compassion. He has occasional sex with his female equivalent, an alcoholic single mum from the shelter who lost custody of her children.

The story then cuts short on Nick’s life to focus on his little brother (never mentioned by name), who has turned into a junkie and is raising his six-year-old Martin alone, following the death of the mother in a car crash. Although the little boy is his only reason to live, Martin’s father gets more and more into drugs. In a vicious circle, he uses drugs to get by financially while gradually losing control of his own destiny.

Nick and his brother meet only twice in the film, under tragic circumstances, yet a lone glimpse of hope comes in the last scene, when Nick seems ready to rebuild a new family from the ashes of the original one. Having reached the rock bottom of society and humanity, throughout the film the brothers never get a chance to surface for air. Hence the title Submarino, which refers to torturing people by keeping their heads underwater.

The audience never gets a moment of respite either, with a bit of humour (as in Mike Leigh or Ken Loach’s social, realistic films) or change of style, and the intentionally unemotional portrayal of these anti-heroes ultimately works against the film.

The acting is convincing throughout, especially from Jakob Cedergren (Nick) whose bleeding soul is hidden under his muscular and tattooed body. The editing could have been tighter, considering the straightforward storytelling. Cold colours and grey settings filmed by first-time DoP Charlotte Bruus Christensen work in tune with the story.

The Danish director made his Berlinale competition debut, this year, with his sixth feature film, the dark social drama Submarino

A harsh social drama about guilt and parenthood, in his darkest film yet Thomas Vinterberg tries to recapture the simpler, more straightforward filmmaking of his earliest work

Thomas Vinterberg resumes shooting for his upcoming Another Round

"In general, war is as life: complex and nuanced"

VENICE 2015: A War - Tobias Lindholm's third feature, in which he also "gave life to his words" - was world-premiered in Venice's Orizzonti competition

The Commune: Vinterberg moves from nuclear family to communal living

Thomas Vinterberg vies for the Golden Bear with The Commune

A War: The consequences of a difficult decision 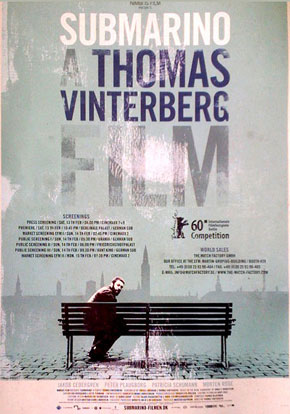