In 2006’s Border Post he used promiscuity of Yugoslav soldiers as a parodic catalyst for what would be the beginning of breakdown of the country. In the new film Just Between Us [+see also:
trailer
film profile], romantic and sexual relationships are at the core of the story about five people whose lives are intertwined in provocative and unexpected ways.

Nikola (Miki Manojlovic) is a 50-year-old businessman, a hedonist with a taste for younger women, married to Anamarija (Daria Lorenci), a dentist who’s been trying to get pregnant with Nikola for years. They finally succeed just when their marriage is hanging by the thread, mostly due to Nikola’s infidelities.

His younger brother Braco (Bojan Navojec) is a university professor, a completely irresponsible “eternal boy” whose wife Marta (Ksenija Marinkovic), a bank clerk who is a couple of years older, has kicked him out after finding an even younger man. And then there’s Latica (Natasa Dorcic), a pharmacist who has a five-year-old son with Nikola and is having a very secret affair with him.

The sophisticated sex scenes provide the backbone for the characters and development of their relationships, and this is Grlic’s strong suit. We learn more about the five people through the way they make love and who they’re making it with than from the dialogue or their social background. Grlic is not interested in criticizing the society and the institution of marriage nor in moralizing and taking sides, he simply presents very real people with many weaknesses and some positive sides that attract us to them. Their passions lead them to hurt people they love and that’s something we all can relate to.

The performances are solid all around, with Manojlovic reminding us of the cult status he earned in the sex-fuelled The Melody Haunts My Memory from 1981, but accolades go to Dorcic for portraying the beautiful, unhappy Latica with the subtlest of acting means. Her emotion range is amazing in two key scenes, and her confrontation with Anamarija is the emotional high point of the film.

Technical credits are flawless, with Slobodan Trninic’s cinematography ably capturing the streets, cafes and different living spaces of modern Zagreb, expertly produced by designer Ivo Husnjak. Music by Alan Bjelinski and veteran Alfi Kabiljo is unobtrusive and functionally used by Grlic. His direction is somewhat old-fashioned, but that’s exactly what this kind of film needs. Such an approach ensures precision and a proper course for the multi-layered script with lively, convincing dialogues.

more about: Just Between Us

For Snežana Penev (This and That Productions), Monument to Michael Jackson was the 15th film she had produced or executive-produced

You Carry Me: An audacious debut in three acts

Another Earth, Bonsai to bookend Raindance

Room 304 shows more than it tells

Entirely filmed in a hotel in Zagreb, Birgitte Stærmose’s first feature, Room 304, is a psychological drama that offers little detail on the background of its plot, instead building suspense ahead... 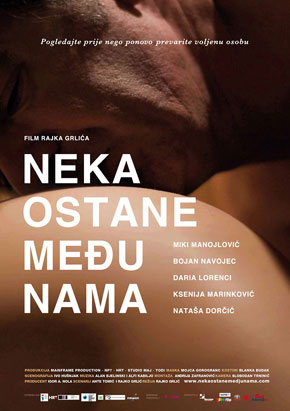