Ezio (Fabio De Luigi) is approaching 40: he’s single, in good health and has money. Enough to allow him to be invent stories that others have to tell – as a screenwriter. The curtain literally opens on him (to let us immediately in on the film’s theatrical origins) in Happy Family [+see also:
trailer
film profile], the new film by Gabriele Salvatores.

The family in question, however, is not his. In fact, there are two families, both the fruit of Ezio’s imagination. While there are more than six characters – two sets of parents, a grandmother with Alzheimers, two teenagers on the verge of marrying and an older daughter who “smells like pickles”) – they have found their author, albeit one grappling with his first script. Nevertheless, we’re in Pirandello territory here, reinterpreted with the surreal touch of Wes Anderson.

After the dark tones of his previous film, As God Commands [+see also:
trailer
film profile], Salvatores – ever faithful to his cinematic (and personal) credo, stated by one of the characters: “You cannot make fools of people, neither in cinema nor in life” – has made a “coloured” comedy, in the literal sense as well.

“This is a film of calculated, dominating colours, with a tremendous amount of work that went into the set designs, costumes and mise-en-scene”, said the director of the Oscar-winning Mediterraneo. He also decided to accompany a long Chopin concert with fade-outs “from the piano keys to images of a nocturnal, invisible Milan; a black and white heart, of real faces, of a film that is anything but realistic”.

DoP Italo Petriccione added: “Italian cinema should work on colours more often, to not become flattened into a television style”.

Not everything here is original, including film references (including The Royal Tenenbaum and The Usual Suspects); references to the past (the 60s, with Simon and Garfunkel music, “making their second soundtrack, after The Graduate”, joked Salvatores); and personal “obsessions” (“What’s true and what’s false? This has been my mania since I made Nirvana”). And sometimes the underlying play written by Alessandro Genovesi, who co-scripted the film with the director, can be felt.

However, these elements are redeemed by the originality of the perspective with which the camera captures Milan’s hidden treasures – “You need only lift your eyes a little to discover a beautiful city,” said Salvatores. As well as the tight ensemble cast, especially the two fathers, Fabrizio Bentivoglio and Diego Abatantuono, who had a homecoming of sorts with Salvatores, 20 years after three made Turné, and enjoyed reminiscing about Marrakech Express.

Produced by Colorado Film and RAI Cinema, for approximately €5.5m, Happy Family will be distributed in Italy on March 26, on 300 screens, by 01. It is being sold internationally by RAI Trade, which has already had requests from several US buyers, interested also in a possible remake.

No fewer than 85 films have been made based on screenplays and storylines selected for the Prize. Finalists and winners of the Prize include Oscar-winning directors and screenwriters

For his third film, the director of La peggior settimana della mia vita has had an entire house built in the historic studios of via Tuscolana

Germany and Switzerland welcome Italian Cinema from September to December

The 14th edition of the Cinema!Italia! Festival will be held in 34 cities with recently produced films specially subtitled in German. The public’s favorite will be distributed by Kairos

Salvatores, Martone, Martinelli 'round the world with RAI Trade 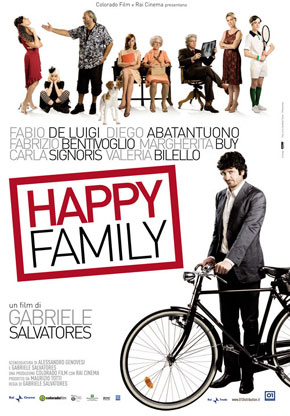