From the standing ovation following its premiere in Venice Days 2009, Spanish director Daniel Monzon’s Cell 211 [+see also:
trailer
interview: Daniel Monzón
film profile] was bound to be a hit with audiences. In fact, it went on to become one of Spain’s top grossers last year and among its many prizes made a clean sweep of the Goyas in February (see news), picking up eight awards, including Best Film, Director, Actor and Male Newcomer.

Though variations of the story have been seen before, the strength of this classically told and filmed prison drama lies in a tight script and powerful performances from leads Luis Tosar (Mondays in the Sun [+see also:
trailer
film profile], Take My Eyes [+see also:
trailer
film profile]) and Alberto Ammann, an Argentinean newcomer working in Spain. Tosar buffed up (both voice and body) for his role as hardened criminal Malamadre, while the latter makes an impressive big screen debut as a novice guard who stars work the same day the inmates organize a mutiny.

Cell 211 takes place over 30 intense hours, during which Juan will come to realize that the good guys and bad guys are not necessarily who he assumed they were. Trapped inside the jail, he pretends to be a prisoner, relying on his quick wits to survive and slowly siding with the inmates, whose demands are simply to be treated as human beings.

Negotiations go smoothly until the rioters take three ETA (the militant Basque separatist organization) prisoners hostage. From thereon out, prison officials watch helplessly while politicians hem and haw over how to handle the conflict and other prison riots break out in Spain, along with demonstrations in the Basque Country.

The film harkens back to the well-known saying: treat people like animals and they become animals. Only Monzon goes further in his social commentary. He condemns social hierarchies, in which the “upper” strata almost always wait for orders from even higher above before acting, even when such paralysis can lead to bloodshed. And he shows that the “cage-keepers” may be the biggest animals of all, and perhaps the first to lose their humanity in the vicious cycle of everyday prison brutality.

Yet the violence here is never gratuitous. On the contrary, it is relatively sparse and clean given the setting. Instead, Monzon relies on building tension in the story and between the characters – Will the prison be stormed by the police? Will Juan be discovered and killed? – which serves the film well. In this way, audiences come to understand and care for the characters, especially Malamadre.

Tosar infuses the leader of the revolt with great sensibility and depth, and viewers root for his anti-hero as much as they do for Juan, as the two find they share the same codes of morality and loyalty. Carlos Bardem (brother of Javier) also stands out as the vicious “Colombian,” a prisoner who suspects Juan from the start and resents him for taking his place as Malamadre’s right-hand man.

A tragic subplot involving Juan’s pregnant wife (Marta Etura), and the character of the warden (played by Antonio Resines) may be somewhat forced, but they drive the story and Juan’s subsequent actions, which seal his fate.

The filmmaker is engrossed in post-production for his seventh feature, an adaptation of the Javier Cercas novel Outlaws, shot last autumn and starring a cast of young actors 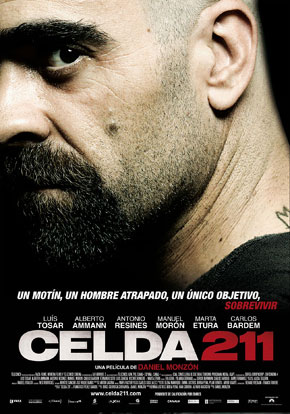