08/04/2010 - A masterful and merciless debut feature on the trivialization of murder in times of war. A film unveiled at Cannes and selected at around 15 international festivals

"We’re going to deal with the enemy": with these words, the leader of a small military contingent in the Balkans, which could be any army in any country at war, sends his ten or so soldiers on a terrible day-long mission, described masterfully and brutally by Serbian director Vladimir Perisic’s debut feature: Ordinary People [+see also:
trailer
interview: Vladimir Perisic: Ordinary …
film profile].

Co-produced by France, Serbia and Switzerland, this terse work with minimalist dialogues and a bucolic atmosphere plunged Critics’ Week viewers into the heart of a harrowing process of desensitisation to unjustified murder.

Day breaks, some soldiers are woken in an army camp and set off by bus to an unknown destination. The radio pours out forceful anti-terrorist propaganda (without failing to point out that "those who commit war crimes will be severely punished"), while the green country landscape passes by.

It’s summer and the men arrive at a large, deserted farm made up of little buildings. Thus begins a long wait in the shade of the trees for Dzoni (Relja Popovic), a young man of around 20, who is a recent arrival in the contingent, after joining the army for want of anything better to do. Then some prisoners are transported in a lorry and the order is given to execute them.

This situation is repeated several times throughout a long day in which Dzoni, whose conscience rebels at the start ("Don’t ask too many questions! Relax, it’ll be alright") gradually becomes a killer like the rest, an ordinary man in this sun-filled darkness.

Filming almost entirely in long, static shots that study the silent faces, with the inclusion of a few, very beautiful travelling shots, Perisic (who also wrote the script) places the slow passage of time at the heart of his film. This creates a compelling atmosphere in which the natural beauty seems tainted by the harshness of the executions and the sound of explosions.

The moral burden weighing down on the soldiers is eased by alcohol and a few unreal attempts to return to normality ("It’s perfect weather for going fishing") or humanity (a shared cigarette). But nobody escapes the duty of delivering death and each has to live alone with this secret ("Don’t say a word about today!"). This clinical description of a terrifying reality is explored in a realist style and looks at the symbolic initiation to evil, giving Ordinary People a universal and philosophical resonance.

A masterful and merciless debut feature on the trivialization of murder in times of war. A film unveiled at Cannes and selected at around 15 international festivals

Winner of the Cineuropa.org at the Miami Film Festival, Vladimir Perisic made a kind of lab experience of his feature debut Ordinary People

Filming under way on Maxime Roy’s The Heroics

Four debut feature film screenplays were selected at the last 2010 session of the advance on receipts committee of the National Film and Moving Image Centre (CNC). Among them is Ilmar Raag’s A...

“We wanted to make a haunting film”

One of Croatia’s best-known filmmakers, Goran Dević, and master director Zvonimir Jurić have made an unprecedented film about the crimes of their own people

The seventh edition of the Crossing Europe Film Festival kicks off April 20 in Linz, Austria with four opening films: Jasmila Žbanić's On the Path and Alexei Popogrebsky's How I Ended This Summer,... 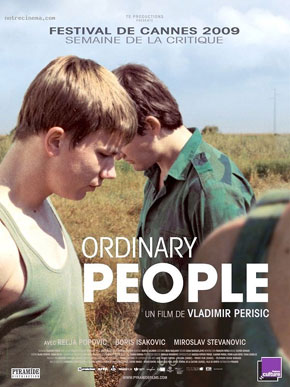