Joie de vivre and the emergence of artistic talent irrespective of world location were the keynotes at the opening of the Directors’ Fortnight, which today unveiled Renaud Barre and Florent de la Tullaye’s outstanding documentary Benda Bilili! [+see also:
trailer
film profile]. Retracing the incredible rise to fame of a group of paraplegic musicians from Kinshasa (in the Democratic Republic of Congo), the film plunges viewers into a moving human adventure with irresistible rhythm and a fascinating journey into the depths of Africa.

Everything starts in 2005 in Kinshasa, a city notorious among the press for being a dangerous filming location ("here, it’s the jungle, the law of the strongest”). While filming a documentary about urban music, two French directors meet the band Staff Benda Bilili and its frontman Ricky. These handicapped musicians live in total poverty, but are driven by an energy, optimism and unfailing generosity, which they continually express in song: "A man is never finished, luck arrives unexpectedly, I used to sleep on cardboard boxes, bingo, I have a mattress!"

Having fallen head over heels for this non-professional, informal band who are unknown outside their run-down neighbourhood, Barre and Tullaye give them the opportunity to record their music in a studio in Kinshasa. This is followed by open-air rehearsals in the zoological gardens; the addition of Roger, a teenager they meet by chance in the street with his monochord (a branch, some string and a tin can); a one-year postponement of the project after a fire at the accommodation centre for disabled people; their reunion, record, first local concert, the worldwide release of their album in 2009, passports and planes; the staggering success of their first French concert at the Eurockéennes Festival in Belfort; a triumphant, ongoing European tour (Germany, Scandinavia…); and a reception given by South American ambassadors…. The Benda Bilili! magic has now reached the Cannes Film Festival in a fairytale journey for this small community in search of an artistic dream, which is synonymous with survival in a very tough life.

The Benda Bilili! epic is above all a beautiful human adventure, which is moving, sometimes funny, sometimes sad, but always swept along by the consolatory and liberating power of its intoxicating music. Through its subtle portrait of these endearing musicians, the film sketches a picture of Africa as a whole, its suffering and unceasing ability to pick itself up again, its colours and anarchic street life, its women and children. Despite their success, Staff Bilili haven’t lost sight of all this: "Today you have a plate, but yesterday you ate off the floor. Never forget, my friend, the wind can change!

BERLIN 2019: After Benda Bilili!, Renaud Barret signs a fascinating new documentary set in the heart of Kinsasha that follows the lives of outstanding artists and street performers

The filmmaker, who was shortlisted for the latest Oscar for Best Short Film, will start shooting his feature debut in May, with production duties handled by Nynamor Films and SND

“The European films are rebellious and inventive”

A scent of Cannes: Of Gods and Men and Benda Bilili 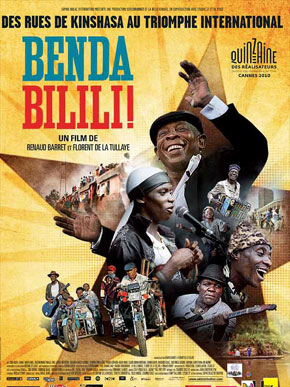