A small Breton village marked by the stamp of Catholicism and a 14-year-old girl at that uncertain threshold between childhood and womanhood: this is the subject tackled with great sensitivity by young French director Katell Quillévéré in her debut feature, Love Like Poison [+see also:
trailer
film profile], which was presented today in the Directors’ Fortnight.

First kisses, first funeral, first realisation of the fragility of her parents who are in the middle of a separation, first doubts about the faith she has been brought up with: this is the life of Anna (impressive newcomer Clara Augarde), who navigates as best she can through that vague area, where secretly, tumultuously and with difficulty the transition to adulthood is made.

The teenage girl, who is a school boarder, returns to her village for the holidays, but her points of reference have faltered in her absence: her father (Thierry Neuvic) has left their home, her mother (Lio) feels desperately humiliated and her grandfather (Michel Galabru), who is bedridden upstairs, is slowly approaching death.

As her religious confirmation ceremony approaches, Anna has doubts. Her body sends her signals triggered by the awkward flirting attempts of a young neighbour (Youen Leboulanger-Gourvil) and her mind has to absorb an overflow of emotions which causes her to faint in a cemetery, then in a church. Shy and almost silent at the start of the film, the teenage girl emerges from her shell and frees herself from the tutelage of family and Catholicism.

A convincing portrait of that young age and its hesitations in the face of the unknown, Love Like Poison progresses subtly, centred on its protagonist whose slightest changes are skilfully depicted. Deserving of a special mention are all the scenes of love’s discovery in which the two teenagers rival each other in their touching clumsiness.

Filmed in a very sober style (static shots and gentle camera movements) with a beautiful sense of framing, the feature is also enhanced by the scenes shot in natural surroundings and the numerous musical passages that heighten the intrigue. The film also manages to avoid making any arbitrary judgements about a religious issue that is nonetheless very present, in particular in the form of the mother and daughter’s priest-confidant, played by Stefano Cassetti.

A little too focused on the theme of conflict between flesh and spirit, Love Like Poison is nonetheless a subtle and promising debut feature which, with its own individual talent, joins the ranks of works by the many young French women directors discovered in recent years at the Cannes Film Festival (Mia Hansen Love, Lola Doillon, Cécile Sciamma, Eleonore Faucher, Axelle Ropert and Julie Bertucelli).

The directors are filming a 6-episode miniseries produced by Les Films du Bélier and Arte France in association with Netflix, on the formation of rap group NTM and the arrival of hip-hop in France

The Wallonian regional investment fund is throwing its weight behind 6 new projects, and 19 projects supported in the past thanks to an additional budgetary allowance of nigh-on €1.6 million

Vincent Lacoste and Vicky Krieps star in the filmmaker's second feature film. A Les Films du Bélier production, to be sold by Charades

VENICE 2016: French filmmaker Katell Quillévéré talks about Heal the Living, which was showcased in the Orizzonti section at Venice and in competition at Toronto

The company, which is run by Justin Taurand, has won the 2016 edition of the award, rewarding a young independent production company

Heal the Living: The transmigration of a heart

VENICE 2016: Katell Quillévéré successfully pulls off a moving and enthralling adaptation of the novel by Maylis de Kerangal, which was showcased at Venice and is in competition at Toronto

There is a strong French presence across the entire official selection at Venice, including Planetarium, Never Ever and Heal the Living

Orizzonti: A showcase for budding directors

Katell Quillévéré gets stuck into The Heart 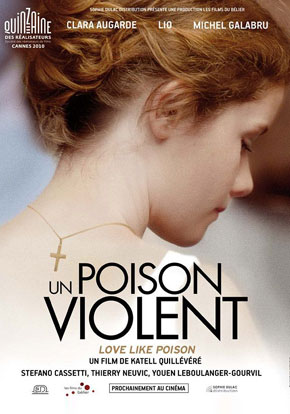