Film Socialism [+see also:
trailer
film profile] takes dumbfounded viewers on a vertiginous journey, provided they’re ready to cast off the discursive moorings to follow Jean-Luc Godard on the not so new waves that are more like ground swells, as announced by the serious-sounding title of two juxtaposed words and the dialogue the Swiss master has always kept up between them, in a continually experimental way.

This is all to his credit. In this film, which is launched on VoD at the same time as its screening in the Un Certain Regard section at the 63rd Cannes Film Festival, we rediscover the director’s passion for exploring images and the technical means of showing them to us, from the old reflex camera and faithful Olympus to the pixellated and jerky images created by the vagaries of digital, which are not soft on the eyes.

His provocative genius for innovation can be found right from the opening credits, made up of abbreviations including O, "textos", "tecknos"... Here we enter a socialist and resolutely intellectual world. The film, heralded as a "symphony in three movements", is divided instead into two sections, with an added coda in which the large red titles that punctuate the entire film turn to black.

The first act, the most visually and aurally cacophonous, traces a boat cruise that is the opposite of an Oliveira-style spoken film. The background noise and interference that have always been dear to Godard are foregrounded here: on this boat where all nationalities and languages mingle, we experience, through aphorisms and sententious exclamations, the degeneracy of Europe against a background nostalgia for origins (Egyptian, geometric...).

Everything happens here: French children speaking in German between two pages of Gide’s "Strait is the Gate" ask an old man what he was doing in 1943; a girl learns to meow via an online video gag; between a close-up of a (false) coin machine and a scene where a young blindfolded girl falls in the swimming pool, the film evokes Odessa, Stalin, Naples, Palestine, and Napoleon, while an American woman demands art and a knife... "THINGS", "LIKE THAT", cross the screen in red letters.

The second act, which is clearer and less noisy, shows a family of politicised garage owners who are filmed by a regional TV network and whose existentialist children refuse to use the verb to be (and what about to have?). Language, from Jakobson to the typography, naturally occupies a large place in the film – which includes English subtitles reduced to short syntagms – as do hieroglyphics, for Film Socialism invites viewers to a process of decoding, which it discourages at the same time.

Indeed, in this film which is not anarchical but anarchist, the director of Week-end makes us understand that everything is there, eloquent, and needs no exegesis. Instead of the word "END", which used to bring the show to a close, Godard writes here "NO COMMENT".

Munich has been celebrating summer in style for the past 29 years with an international festival that has become the most important one of the season in Germany, with over 65,000 admission tickets...

In collaboration with the Federal Office for Culture, film promotion agency Swiss Films grants an annual sum of €300,000 to support the foreign distribution of Swiss films. At the final funding...

Although there are no French films vying in competition for the Tiger Awards at the 40th Rotterdam International Film Festival which opened yesterday, Gallic productions are well represented in... 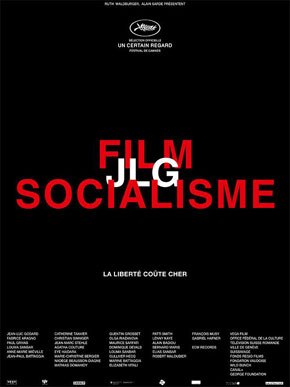