05/07/2010 - A multi-dimensional parable on the theme of creation skilfully directed by Hungarian filmmaker Kornél Mundruczó. In competition at the 2010 Cannes Film Festival

Christmas is approaching, fir trees are on display everywhere and family inevitably resurfaces like a mirror from which no-one can escape. Exploring in depth, with his usual uncompromising approach and extraordinary stylistic talents, the theme of difference and bad karma of human beings faced with their creations, Hungarian director Kornél Mundruczó unveiled in competition at the 63rd Cannes Film Festival a radical, fascinating and esoteric work: Tender Son – The Frankenstein Project [+see also:
trailer
film profile].

Loosely adapted from Mary Shelley’s legendary Frankenstein, the film recounts the reunion between a son abandoned at birth (Rudolf Frecska) and his film director father (played by Mundruczó). "When I was little, I liked justice to prevail (…) Now I talk about lost illusions", explains the director to a journalist in the film’s prologue which also includes mention of the Count of Monte Cristo, a forewarning of the dramatic events to come.

A grey and wintry Budapest passes before our eyes until we reach a labyrinthine apartment building (inner courtyard, circular gallery on every floor), which is just about to be demolished and where the director organises a casting and auditions non-professionals. Almost all the film unfolds in this setting redolent of a prison, which is wonderfully exploited to great effect by Mundruczó’s fluid camerawork.

While the film opens to the sound of laughter at the failed auditions, real tears soon follow, brought forth by the emotionally manipulative director. But the arrival of the "tender son", who has an unfathomable expression and chaotic gait, throws everything into turmoil.

Having escaped from his orphanage, the 17-year-old boy has found his mother who lives in the apartment building and he wants to know who his father is. Pushed to his limits by the director’s auditions, he strangles his acting partner (who was desperately trying to kiss him) before disappearing.

Two murders follow in the course of a sombre family catharsis in which the boy turns out to be a Frankenstein, an uncontrollable creature of disturbing emotional strangeness, a child seeking instant satisfaction of his desires and killing only when he is threatened and without really intending to do so.

Naively in search of love and identity, the teenager just sinks further into the freedom-deprived life he has always endured: an unstoppable machine is in motion. But the young "monster" ends up discovering who his creator is and why he was banished from the world right from the start.

An obscure, multi-layered parable on the theme of creation, Tender Son – The Frankenstein Project gives a new glimpse of Mundruczó’s extraordinary potential. With every film, the Hungarian director rises to new aesthetic challenges (including snow this time), achieving a sort of perfection in his directing, the work on the sound and the contribution of the (very beautiful) musical score. And while his minimalist dialogues and deliberate stylisation of the acting make his films impenetrable (to the point of putting some viewers off), he nonetheless remains a director of great distinction.

A multi-dimensional parable on the theme of creation skilfully directed by Hungarian filmmaker Kornél Mundruczó. In competition at the 2010 Cannes Film Festival

Bogdan Dumitrache, Alexandra Borbély and Diána Magdolna Kiss are among the cast of the filmmaker’s feature debut, which is being staged by Inforg - M&M and Spiral Film

Jupiter’s Moon in competition, co-production Out in Un Certain Regard and a number of titles at the market, as we wait for news from Laszlo Nemes

Son of Saul: Survival in a “Sonderkommando”

A new selection on the Croisette for Kornél Mundruczó

White God by Kornél Mundruczó in the starting-blocks

“Film professionals need to be generous” 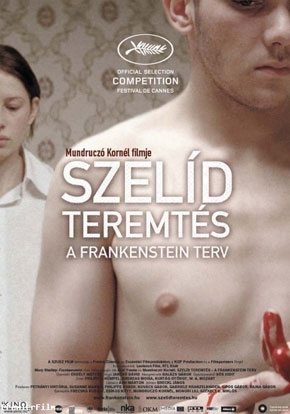 Venice’s Focus on China sees Italy, China, the USA and India come together