08/11/2010 - The destiny of three young revolutionaries involved in the struggle for Italian unity. A historical fresco with contemporary echoes unveiled in competition at Venice 2010

Loosely based on real historical events and on Anna Banti ’s eponymous novel, the film has obvious links with the present. "We Believed is constructed from rigorously historical material", explained Martone at the press conference. "We wanted viewers to be the ones to create the connection with the present. We didn’t want to give a nod to current events, but bring nineteenth-century language alive, delving into the fabric of our present".

To make the connection with today’s world more obvious, the director does however use a few visual devices: a modern garage, a prison still used in the 1970s for the Red Brigade terrorists and one of the monstrous buildings that blight the southern coast.

Co-screenwriter Giancarlo De Cataldo described the adventure of a journey through the many documents and letters with which "we constructed this story, until we felt transported to that era. Free from prejudice". Indeed, there are two opposing theories about the Risorgimento: one sees it as the endeavour of young and beautiful heroes fighting for Italian unity, while in reality the different factions remained hostile; and another represents it as a sort of "deception" perpetrated to the detriment of a population that didn’t want to be freed at all and adored the Bourbon kings and popes.

In the film, after the fierce Bourbon repression of the 1828 uprisings, involving their families in Cilento, Domenico, Angelo and Salvatore decide to join Giuseppe Mazzini’s Young Italy. Their future lives as conspirators and revolutionaries are told in four episodes, up to Italian Unification, through insurrections, anti-monarchist attacks, Garibaldi expeditions, long periods of imprisonment and shootings. This is all heightened by Hubert Westkemper’s original music compositions and pieces by Verdi, Bellini and Rossini conducted by Roberto Abbado.

We Believed was produced for a budget of between €6-7m by Palomar, Rai Cinema and Rai Fiction in co-production with Les Films d'Ici and Arte France Cinéma.

more about: We Believed

A 19th century between the past and the present

Cineuropa caught up with Mario Martone at the Venice Film Festival, where his period piece We Believed, inspired by true historical events of the Italian Risorgimento played in Competition

The destiny of three young revolutionaries involved in the struggle for Italian unity. A historical fresco with contemporary echoes unveiled in competition at Venice 2010

Director Mario Martone explains to Cineuropa the genesis of his film We Believed, which aims to retrace Italy’s origins

The debut feature by Emanuela Rossi is a post-apocalyptic, feminist take on captivity, abuse within the family and liberation

The new feature from the director of Le quattro volte is now filming in Pollino National Park. A co-production between Italy, France and Germany, with Renato Berta as director of photography

End of filming for Edoardo Ponti’s The Life Ahead

The lead actress in the film shot in Puglia is Sophia Loren, taking on the role played by Simone Signoret in the adaptation of the famous eponymous novel by Romain Gary

"Emancipation via a group experience in Capri"

VENICE 2018: Neapolitan director Mario Martone is competing at Venice Film Festival with Capri-Revolution, and talked to us about it 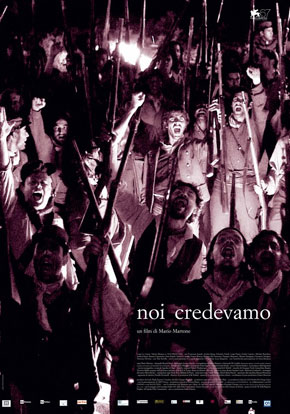