25/11/2010 - Finnish director Jalmari Helander’s stylised, wild and dark version of the Santa Claus tale lands in hundreds of cinemas around the world after having won awards at Locarno and Sitges

Rare Exports: A Christmas Tale [+see also:
trailer
interview: Jalmari Helander
film profile] is one of those rare feature debuts carried by heavy industry awareness and media hype even before audiences have set foot in cinemas. The centre of a bidding war among sales agents at the last Berlinale (won by French company Kinology), the film picked up the Variety Piazza Grande Award in Locarno and four statuettes (including Best Film and Best Director) at the Fantasy Film Festival in Sitges. Now grown-up kids better watch out: Helander’s scary Santa Claus is coming to towns in the US, Australia and Scandinavia.

The director and his brother Juuso Helander’s wild idea of re-writing the Christmas story and turning the archetypical jolly Santa Claus into a naked geriatric chased by lawless hunters was first used in Helander’s short film Rare Exports Inc (2003) and its 2005 follow-up, Rare Exports: The Official Safety Instructions, which achieved cult status on the web. Both short films cleverly turned Santa himself into a consumer good sold internationally as a rare export.

With this longer version, Helander further elaborates on the idea of the original Santa from Finnish folklore that would terrorise children. In Helander’s script, the mythical Santa (Peeter Jakobi) was lured centuries ago by Sami people into a trap and remained stuck under 486 metres of icy ground until he is excavated by a US team of scientists. A young boy, Pietari (Onni Tommila), son of a local reindeer slaughterer, discovers this unbelievable truth and that the “real” Santa is a nasty predator, kidnapper of naughty children.

Meanwhile, Pietari’s father Rauno (Jorma Tommila) and two associates discover a mass killing of reindeer that they believe is caused by the nearby excavation team. Back home, Rauno finds a naked, evil-looking old man in a wolf trap. He and his friends soon realise it is none other than Santa himself, escaped from the Americans, and decide to sell him to the scientist supervising the dig. Hordes of creepy, naked geriatric elves arrive to help their master but the clever Pietari is there to save everyone from what could have turned into a truly unhappy Christmas.

Well supported by much if the same cast as his short films, Helander has opted for a more serious tone, using the young boy’s point of view to re-tell this Tim Burton-esque version of Santa’s story. Digging into his own film references of US action and fantasy films, he has added the Scandinavian spice and visual inventiveness already displayed in his shorts. The icy Lappish landscapes are beautifully captured by DoP Mika Orasmaa and the feel of the large-scale adventure epic is wrapped up in sweeping musical orchestration. The scary elements (suggested more than shown) are sufficient to keep 13+ viewers on edge, but could have been further elaborated – along with the original concept – to make Rare Exports a timeless seasonal delight.

The film was produced by Cinet Film in co-production with Pomor Film (Norway), Davaj Film (Finland), Love Streams Agnès B. Productions (France), with support from the Finnish Film Foundation, Filmcamp and Filmpool Nord.

“Americans have destroyed the myth of Finnish Santa before me. It’s payback time!”

Jalmari Helander is among Finland’s hottest new directors. His scary version of Santa Claus in his feature debut, Rare Exports: A Christmas Tale, has thrilled industry people over the last year

Finnish director Jalmari Helander’s stylised, wild and dark version of the Santa Claus tale lands in hundreds of cinemas around the world after having won awards at Locarno and Sitges

The 33rd BIFFF will unspool from 7-19 April, boasting its usual rock-solid programme and, for the first time, a European Genre Film Market

A Climate of Change

The Postcard Killers are coming to Bavaria 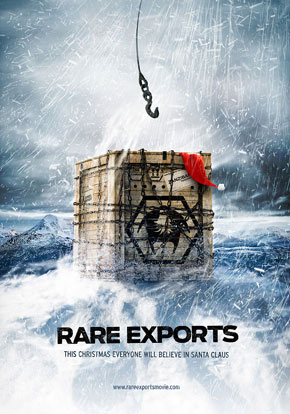