For years, Cuban musician Bebo Valdés and Spanish filmmaker Fernando Trueba have been enjoying a rather prolific professional “love story”, which has given rise to musical and film productions. Taking this mutual adoration further, the director of The Age of Beauty embarked on a long-term project and involved Javier Mariscal, one of Spain’s greatest illustrators and designers, who created the mascot for the Barcelona Olympics of 1992, among other famous works. They were joined by co-director Tono Errando and novelist Ignacio Martínez de Pisón as co-screenwriter.

This combination of talent resulted in Chico & Rita [+see also:
trailer
making of
interview: Javier Mariscal, Tono Errando
film profile], a film steeped in love for classic American films, jazz and the passionate people of Cuba, the birthplace of geniuses like the aforementioned Valdés, to whom the film is dedicated and who composed its score. The unmistakable drawing style and sharp outlines of Mariscal’s images stand out against the film’s backdrops (his rendering of the New York and Havana skylines is, for example, magnificent) and blend harmoniously with the digital animation that brings the characters alive.

In making the movie, Trueba explained that they filmed with actors first and then drew over their movements. This technique lends a special dynamism to the human figures, which are particularly sensual in this tale of separations, reunions and uncontrollable physical attraction, reminiscent of the passionate outbursts of Hollywood films of the 1940s and 1950s, with their brazen heroes and courageous heroines who couldn’t live together, but certainly couldn’t live apart.

Chico & Rita – which won Best Film at the Holland International Animated Film Festival and the 2010 Cineuropa Prize at the Les Arcs European Film Festival – is like a bolero, a musical-emotional adventure fuelled by great passion. The story opens in 1940s Cuba, where pianist Chico enjoys himself until the small hours with American tourists. When he meets Rita, a singer who is as beautiful as she is feisty, it’s love at first sight.

Although they enjoy a first night together immersed in music and sex, Chico’s lies make Rita angry and she leaves him. Then they get back together again and win a radio competition which elevates them to fame and leads them to perform in legendary clubs like the Tropicana, attracting attention from film producers and arts agents. But jealousy always gets in the way, poisoning their relationship. Their disagreements will follow them to New York, Paris and Las Vegas throughout the decades, told in a long flashback that takes up the whole film.

Chico & Rita is an emotional, musical and aesthetic experience that will delight fans of jazz, Latin rhythms and Cuba. Thanks to the naturalness of its animated images, this Spanish/UK co-production manages to recreate settings, attitudes and atmospheres from a nostalgic past that would have cost a lot more to produce had they been filmed in live-action. Moreover, the hand-drawn images lend this story of mad love a romantic, dreamlike and festive look all at once, underscored by the red-hot rhythms that underscore a passion wounded by ambition, pride and the need to broaden one’s artistic horizons.

The Queen of Spain: Film, history and a lot of laughs

Antonio Resines confirmed as president of the Spanish Film Academy

Ernest & Célestine on their way to the Oscars

Unit 7, The Artist and the Model and Blancanieves shortlisted for Oscar 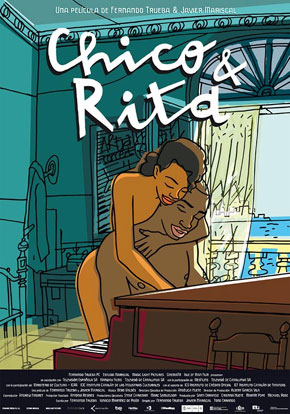