09/02/2011 - After his hit Mid-August Lunch, the Jacques Tati of Trastevere returns with a melancholic and funny tribute to the mysterious world of wome

While The Salt of Life [+see also:
trailer
interview: Gianni di Gregorio
film profile] comes out February 11 in Italy on 150 screens through 01 Distribution and will screen the following day in the Berlinale Special section, Fandango Portobello has already pre-sold the film to France, Benelux and Switzerland.

The Jacques Tati of Trastevere (Rome’s most picturesque neighborhood, where the director was born) returns in slightly different form from Di Gregorio’s directorial debut, in another equally small and equally universal film. In Mid-August Lunch, Di Gregorio played the only son of a faded, capricious, oppressive and once-rich widow whom he had to care for.

In The Salt of Life the protagonist/director is a pensioner with a wife who ignores him and a daughter who pities him, but the mother (once again played by the incomparable Valeria de Franciscis Bendoni) is the same. As Gianni scrapes by with his paltry pension, his exasperating mother lives in a luxurious villa in the centre of Rome crammed with expensive works of art, spends her days playing poker with her girlfriends, “snacks” on €200 bottles of champagne and covers her Eastern European caretaker with expensive gifts.

And while Gianni ambles through his neighbourhood dreaming of a romantic adventure yet only evoking the smile of a young woman, his elderly mother calls him at all hours of the day, for petty reasons – such as to move her TV antenna when she loses reception.

Di Gregorio – who got the film for the film while riding the bus, after realizing he’d become invisible to women – identifies with his character the way Nanni Moretti poured his own idiosyncrasies in his alter ego Michele Apicella. A blend of melancholy, comedy, with touches of Fellini, Truffaut and the new Balkan cinema, Salt is a hymn to women, to their being as unknowable as they are desired. At the same time, the film expresses its disappointment in the passing of time, and in the decline of a body that once mirrored a soul hungry for life. A lazy life, but one full of colour and sensory pleasures nonetheless.

more about: The Salt Of Life

My film about women came to me on a bus

Time passes and women no longer smile at you. There is nostalgia and romanticism alongside the light-hearted and irresistible humour characteristic of the Italian director

After his hit Mid-August Lunch, the Jacques Tati of Trastevere returns with a melancholic and funny tribute to the mysterious world of wome 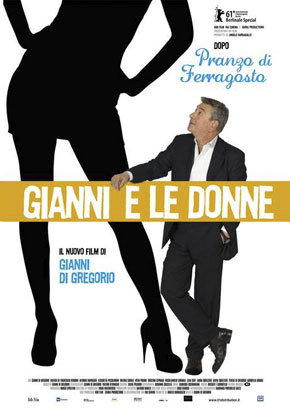