07/04/2011 - A bold and luminous second feature about childhood and sexual identity, unveiled in the Berlinale Panorama, confirms the remarkable talent of Céline Sciamma.

This is what’s called getting your career off to an auspicious start. After her debut feature Water Lilies [+see also:
film review
trailer
film profile], an astonishing discovery in the Cannes Un Certain Regard section in 2007, Céline Sciamma returns with Tomboy [+see also:
trailer
interview: Céline Sciamma
film profile], which opened the Panorama section at the Berlin Film Festival 2011. A graduate of the screenwriting course at La Fémis Film School, the 30-year-old French director immediately emerged as one of the most promising members of a thriving generation of women directors (that includes Mia Hansen-Love, Léa Fehner and Rebecca Zlotowski).

Endowed with many qualities, Sciamma finds an original way to blend well-trodden themes like adolescence and childhood with deep psychological issues. With great aptness, she combines simplicity and complexity, a highly realistic immersion into the characters’ private lives and dramatic catalysts that inject energy into the narrative and successfully create suspense. Subtly incorporating well-oiled script devices with a sensitivity that brings her as close as possible to her characters, the director confirms her potential with the strange tribulations of Tomboy’s protagonist, a girl who pretends to be a boy.

Laure (Zoé Heran) is 10, an age on the border between childhood and adolescence. An age when girls still enjoy playing like little girls yet sense the changes that will transform them into teenagers, when parents start to grant certain freedoms even if we still like to cuddle up in their protective arms. But Laure also has to deal with a move during the summer holidays that catapults her and her family (her father, five-year-old little sister and their heavily pregnant mother) into a new apartment, in the middle of a quiet housing estate on the edge of a forest.

Moreover, Laure has a tomboyish, androgynous look that will play a decisive role in the film from the very onset, in a misunderstanding that drives the entire plot. Lisa (Jeanne Disson), a neighbourhood girl her age, mistakes Laure for a boy and the latter decides to play along, telling Lisa her name is Michael. This huge lie makes viewers accomplices to a deception that Laure will keep up through endless ruses.

Introduced into the small circle of neighbourhood children, as Michael she tries to embody the archetypal male, playing football, giving high-fives, spitting and fighting in front of Lisa, as they start to develop a crush on each other. Back home, she is Laure again, the daughter of loving but busy parents (Sophie Cattani and Mathieu Demy), and big sister to funny and endearing Jeanne (Malonn Lévana).

This double life obviously hangs on a thread: Will Laure be found out or will she reveal her secret? How far can she go with this lie? Is it a sophisticated game or a deeper question of sexual identity? Sciamma brilliantly pulls off the challenge of this enigma, painting a convincingly natural counter-portrait of childhood from several angles (at five years, at 10, in a group, in the family, the relationship between sisters, the first sexual feelings, games….).

From a sketchy plot, the director manages to create a whole world where ambiguity and transparency overlap, using pared-down stylistic effects. The directorial framing from a child’s eye view enables both intimacy and a luminous immersion into the almost intoxicating natural surroundings (the trees, wind, forest, pond). With this puzzle-like film about the mirrors of identity, shot at lightning speed on a small €1.02m budget, Sciamma brilliantly avoids the usual pitfalls of the second feature and asserts herself as a director we should continue to watch closely.

“Nothing will ever be the same again”

Appealing new titles for mk2 Films at the online AFM

Review: Portrait of a Lady on Fire

My Life as a Courgette: A tender look at the darkest of childhoods 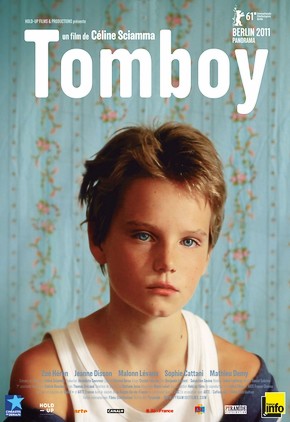