28/04/2011 - A group of soldiers in the grip of strange phenomena in the immediate aftermath of the Bosnian war. An intellectually stimulating film full of shudders and suspense.

In the past few years, Serbian producers have been increasingly turning to the Republic of Srpska for production partners and to use funding and shooting locations in the Serbian political entity of Bosnia and Herzegovina. Artistically speaking, the latest of these collaborations is also the most successful: Serbian director Dejan Zečević’s The Enemy [+see also:
trailer
interview: Dejan Zečević
film profile], a co-production between Biberche (Serbia), Balkan Film (Bosnia), Maxima Film (Croatia) and Tivoli Film Produkcio (Hungary).

The story takes place in an unspecified Bosnian rural area in 1995, a week after the end of the Balkan War. A group of seven soldiers is dismantling the landmines they planted during war operations. As they await their replacements, they discover a shabby, middle-aged man (actor and co-producer Tihomir Stanić) walled in in an abandoned factory, and free him. He says his name is Daba, he is neither hungry nor thirsty and he comes “from nearby”. He is “one of them” (meaning Serbian) and was walled in “by the enemy”.

When the unit’s sniper Sivi (Vladimir Djordjević) suddenly disappears, some of the men go looking for him and encounter two enemy soldiers who try to capture them. Caki (Vuk Kostić) manages to wound one, while the other escapes. The fact that the wounded soldier is Bosnian, and the escaped one Serbian, indicates that something is seriously wrong.

Other strange things start happening: the replacement unit doesn’t arrive, the radio dies and, most surprisingly, overnight they are surrounded by new land mines – which they didn’t plant. Things are further complicated when a young woman (Marija Pikić) arrives and informs the unit that the half-burned house in which they’re stationed belongs to her family. All the while, Daba just sits quietly smoking and talking to the soldiers guarding over him.

The soldiers soon start cracking and turning on each other. From the religious Vesko (Slavko Štimac of Life is a Miracle and Underground), to city slicker Case (reality show host Dragan Marinković), to university-educated Caki and commander Cole (Aleksandar Stojković), they all start losing their minds. In the manner of a classic “isolated group in trouble” set-up, reminiscent of John Carpenter’s The Thing (but without the gore), or, more recently and geographically closer, The Blacks [+see also:
film review
trailer
interview: Zvonimir Juric, Goran De…
film profile] (Croatia), Zečević builds a psychologically oppressive atmosphere.

One reason for the tension is that we’re not really clear about Daba. Some think he’s a demon, others claim he’s the devil, and Caki explains he may be the demiurge, the creator of our world. In Balkan lore, Daba is a name for the oldest demon, but Stanić plays him like a Hannibal Lector, with an understatement that fluctuates between innocence, madness and sinisterness, never slipping into snarling, psychotic mannerisms often reserved for such characters. This ambiguity lifts the film from pure genre and pushes it to the border of arthouse, providing intellectual stimulus in addition to thrills of suspense.

The locations – the mountain Kozara and cities of Banja Luka and Prijedor – play a role as important as any of the characters. The wooded hills, the burned-up house and the ruined factory evoke an otherworldly feel intensified by Dusan Joksimović’s under-saturated camera and strong contrasts.

The Enemy will be presented at the Cannes Market by French international sales agent Insomnia.

more about: The Enemy

After a docu-fiction, a horror film, a comedy and a thriller, the Serbian director has decided to mix genres in a movie about the Bosnian war: The Enemy.

A group of soldiers in the grip of strange phenomena in the immediate aftermath of the Bosnian war. An intellectually stimulating film full of shudders and suspense.

Dejan Zečević's eighth film is an arthouse drama-thriller with shades of horror, supported by some marvellous black-and-white cinematography and an electronic score

Dejan Zečević's The Rift launches in Serbia and Slovenia

Angelina Nikonova’s Twilight Portrait won top honors at the Thessaloniki International Film Festival on 12 November, with the director picking up the Golden Alexander Award, along with her actress... 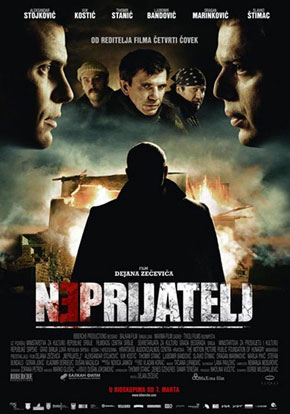