28/04/2011 - André Øvredal brings the mythical creatures back to their natural habitat and their predatory capacity in his first feature film, a comedy/horror mockumentar.

As pop culture embraced and mixed Nordic mythology with other Eurasian lore, from classic fairytales to Tolkien, trolls went through many transformations, at times even wearing clothes and communicating with humans. Norwegian director André Øvredal brings the mythical creatures – huge, hairy, ugly, sometimes three-headed monsters – back to their natural habitat and their predatory capacity in his first feature film, the comedy/horror mockumentary The Troll Hunter [+see also:
trailer
interview: Andre Øvredal
film profile].

A group of film students – director Finn (Hans Morten Hansen), cameraman Kalle (Tomas Alf Larsen) and sound recordist Johanna (Johanna Mørck) – investigate unexplained killings of bears. As it’s very hard to get a bear-hunting license in Norway, and all the hunters know each other, it can only be the work of a poacher, Hans (comedian Otto Jespersen), who first tries to send the nosy students away, then agrees that they follow him – as long as they do exactly as they’re told.

It’s only 20 minutes into the film when, following Hans the Troll Hunter, the students encounter their first troll, a three-headed Ringlefinch, one of four species of creatures they will eventually discover. We learn that trolls can be killed by UV light, that they feed on stones and can smell the blood of a Christian.

In the first sighting, Øvredal keeps to the “hide the monster” approach characteristic of most found footage mockumentaries, and we just get to see a blur of trees and the Ringlefinch in the distance, through a night vision camera. But just as he knows that the audience likes to be teased, the director is obviously certain it also wants to see the monster. So in the following proceedings, Kalle does his best to get a good shot of the trolls and the film practically turns into a full-on spectacle, playing more like Jurassic Park, with the final scene a clear homage to the chase of a T-Rex and a jeep from Spielberg’s hit.

The found footage horror sub-genre has grown tired since Blair Witch and Øvredal skilfully plays it very tongue-in-cheek. Additional satire comes from Hans’ complaints about long working hours and lack of social benefits for the only troll hunter in the country, as well as from the idea that the power lines Norwegians keep complaining about, because they are ruining the natural beauty, are actually fences against trolls. This is one of the reasons The Troll Hunter plays much more like comedy than horror, but its main goal is clearly fun and it succeeds phenomenally.

Besides the spectacular special effects based on creatures sketched by famous Norwegian illustrator Theodore Kittelsen, the film makes excellent use of the country’s magnificent landscapes. It is hard to imagine a better combination of digital camera (by Hallvard Bræin, co-director of 2005 documentary hit The Giant) and impressive nature (huge forests, snowy hills, dark blue lakes) at the service of a fantasy film.

The fact that production companies Filmkameratene and Film Fund Fuzz made the film for a reported €2.5m proves that imagination and skill can go much farther than big budgets.

The Norwegian director talks about his directorial choices for the mockumentary The Troll Hunter, his approach to its mythological subject and the film's financing.

André Øvredal brings the mythical creatures back to their natural habitat and their predatory capacity in his first feature film, a comedy/horror mockumentar.

"In addition to the legendary aspect of Mortal, there are also some spectacular elements"

Norwegian director André Øvredal talked to us about his latest feature, Mortal, which is released today in cinemas in Norway

Long live the “Fresh Flesh” at the Marché du Film

CANNES 2020: Forget Nordic noir – for the rising genre filmmakers from the North, it’s all about folklore these days

After filming The Autopsy of Jane Doe in the USA, Norwegian director André Øvredal returns to Norway for his next outing

CANNES 2017: Various high-profile movies, such as Radiance and The Killing of a Sacred Deer, were acquired right away at the festival

"I love to experiment, but I also love to lend my talents to causes that I hold dear"

The Autopsy of Jane Doe: The dead have their secrets too 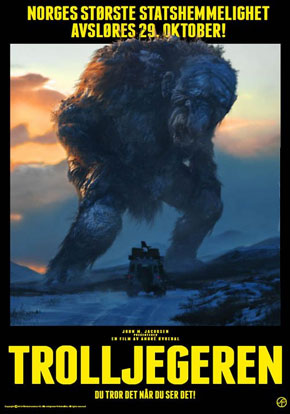