12/08/2011 - A review of the De Serio brothers’ first fiction film, Seven Works of Mercy, in competition at Locarno.

It was definitely the most crowded press conference 64th Locarno Film Festival, but journalists were in the minority – it was the ‘delegation’ from Italian film Seven Works of Mercy [+see also:
trailer
film profile] that ruled the room. Everyone was there: the two directors, the main actors as well as producers, director of photography, director’s assistant, editor, music composer, various members of the troupe, the inevitable politician and assorted parents. In short, a folkloric cross-section of today’s Italy.

But appearances are often deceptive and the film, in competition at Locarno, has won more attention for its substance and professionalism than its folklore. As explained by the twins Gianluca and Massimiliano De Serio – who co-wrote and directed the film – the feature is an exploration of themes that include identity, moral and physical degradation, compassion, mercy, already present in their previous documentaries. In Mio Fratello Yang, for example, a 17-year-old Chinese girl arrives illegally in Italy and is forced to take on the identity of a Chinese girl who has gone missing; in Zakaria a young boy of Arab origin, but born in Italy, follows his own roots by learning the language and religion of his parents; and in Bakroman some street kids in Ouagadougou, in Burkina Faso, organise themselves into a kind of ‘union’ to defend themselves and to help each other survive.

In Sette Opere di Misericordia, their first fiction film, we find ourselves in a suburb, which is above all the suburb of the soul, a border between good and evil. Luminita (Olimpia Melinte), a young clandestine, lives in a shantytown, segregated in a van by her exploiters, to make a living she walks around the aisles of a hospital robbing patients and visitors. The girl is depraved, deprived of emotions, only desperation and anger, and when a nurse in the hospital asks that she commit an aberrant crime in exchange for an identity and a document, she has no qualms about accepting. That is how she starts on an old sick man, the monumental Roberto Herlitzka. The girl watches him, follows him, she needs him for her criminal plan. The meeting/conflict between the two is a question of survival, it is overwhelming, and tears up both souls so deeply as to open up the possibility of human contact and a feeling of compassion.

The whole film is marked by symbols of the titular ‘seven works of mercy’, which underline, with an ironic twist, the link between the characters’ actions and the theme of mercy. The irony gradually disappears as the film progresses, leaving room for the existential tension of redemption.

The story-telling centres on an eloquent physicality, with actors’ bodies the true protagonists of the film. “Mercy,”, the directors explain, “is taking care of another, of another’s body, the suffering, sick, dying body. The needy body, one longing for human contact. And it is hunger, the devouring urgency for human contact which the characters’ lives illustrate. A contact that is made thanks to their fortuitous, desperate, violent – and extremely human – encounter.”

more about: Seven Acts of Mercy

A review of the De Serio brothers’ first fiction film, Seven Works of Mercy, in competition at Locarno.

Tharlo by Tibetan director Pema Tseden will screen in the Orizzonti section, which will be opened by Rodrigo Plá's A Monster with a Thousand Heads

The historical festival, which was founded by Lino Micciché and Bruno Torri, turns fifty this year with a new artistic director and a special focus on young people

La Sapienza, a love story between architecture and feelings

Shooting for French director Eugène Green’s latest film kicked off today. The film is set to be produced by Italian Alessandro Borrelli for Sarraz Pictures and by Martine de Clermont-Tonerre for...

The month of Romanian cinema

Spring brings six domestic releases in less than a month

Claudio Giovannesi tells the story of a second-generation immigrant adolescent living on the Roman coast, where Pasolini was killed in 1975

The story of a second-generation immigrant adolescent living on the Roman coast, where Pasolini was killed in 1975

Cannes will be an opportunity to promote new projects, consolidate existing partnerships and explore the potential for European co-production networks 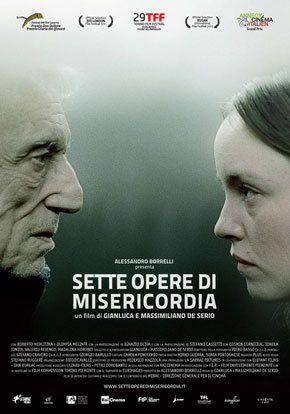 The Spanish filmmaker is staking another claim to the Golden Shell with this genre-defying feature, coaxed into life over the course of five years with the generous participation of a cast of young actors

Koks, one of the most remote Michelin-starred restaurants in the world, is the protagonist of the Danish helmer’s new documentary