24/09/2011 - Delinquency, racism and integration in Europe. An explosive subject for a Swedish film of rare intelligence. Unveiled at Cannes and finalist for the Lux Prize 2011.

An explosive subject in a package open to interpretation: in tackling the complex (and topical) issues of delinquency, racism and integration in Europe with a rare intelligence and distinctive style, Play [+see also:
trailer
interview: Ruben Östlund
interview: Ruben Ostlund
film profile] by Swedish director Ruben Ostlund stunned audiences and gave food for deep thought at its Directors’ Fortnight screening.

Based on true events that took place in Gothenburg between 2006 and 2008, Play provides a detailed and carefully paced account of a protection racket between a group of young teenagers. The Gordian knot of the tale is that the five racketeers are black, and their victims two Caucasians and one of their friends of Asian origin. The small, seemingly unified gang uses fraud, psychological intimidation (following victims in the tram and on the street, leading people to an isolated place where they finish the deal), leaders and followers, role playing (good cop-bad cop) and constant fun-and-games.

These acts obviously cause victims to panic, calling their parents for help but getting through to their answering machine; soliciting help from adults who don’t want to bother the police or prefer to turn a blind eye, they fight, they break up (the Asian is far from happy to be used as a negotiator). They victims are even are subjected to a morality lesson after get fined for fare dodging – how could they not seeing as how they were robbed of everything by the racketeers.

Valuables and brand goods (iphones, MP3s, Diesel jeans) change hands by the end of a short game in which the victims are forced to hand over the items of their own “free will”. They fail to understand that the social rules they’ve learned don’t work at all with a "gang" who amuse themselves at their expense and shamelessly cheat.

A lost and helpless society face a new phenomenon, where new rules have to be written and learned, one of the many messages Ostlund aims to communicate. But beyond the surface delinquency, it is the issue of integration that in greater depth. Who are the children of Sweden today? Are they that different from one another? What do their parents do and adults in general? These broad societal issues in which money and consumerism play a fundamental role lend an engaging element that is both disturbing and amusing to a highly realistic, ever intriguing story imbued with a certain amount of suspense despite its measured rhythm.

Intersected with micro scenes from daily Swedish life (in trains, shopping centres, offices), Play is also a magnificent display of panoramas and off-screen elements that symbolise a society hiding the sweeping change already well underway behind a functioning, calm façade. Ostlund skillfully captures this upheaval by foregoing the "politically correct", and without creating angels or demons, offering instead numerous points of reflection and complexity behind the reality of a simple (and simplifying) event.

Delinquency, racism and integration in Europe. An explosive subject for Play, a Swedish film of rare intelligence. Unveiled at Cannes and finalist for the Lux Prize 2011

"We humans are so afraid of questioning the rules"

Selected once again at Cannes with Play, the Swedish director explains why he took an interest in a highly polemical news story involving delinquency and racism.

Delinquency, racism and integration in Europe. An explosive subject for a Swedish film of rare intelligence. Unveiled at Cannes and finalist for the Lux Prize 2011.

“Love your film, because it will always have your name on it”

We talked to Swedish producer Marie Kjellson, selected for the EFP’s 2020 Producers on the Move about her career

The Palme d'Or goes to The Square 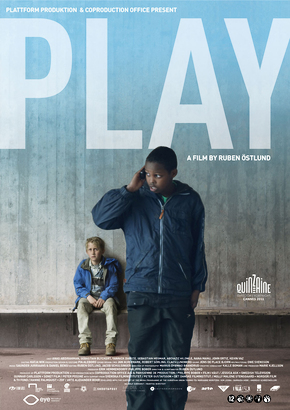