Swedish director Björn Runge, who won the Silver Bear at Berlin in 2004 with Daybreak, is for the first time vying in competition at the San Sebastian Film Festival with Happy End [+see also:
trailer
film profile], a film that closes his trilogy about personal “liberation” with a sober and harsh drama which was well received by the audience but left critics cold.

Based around a script penned by Danish screenwriter Kim Fupz Aakeson and a cast headed by renowned Scandinavian actress Ann Petren, Happy End centres on the romantic or family ties between Jonna, Peter, Katrine, Asger and Mårten, full of falsehoods, lies, psychological mistreatment and violence that bring their lives to limit situations where the way out is difficult to find. A vital solution for liberation can come from the interactions that develop between the characters and bring about a change in their own individual self-perceptions.

The film is bolstered by the remarkable performance by all the actors but it repeats all the formulae long associated with this type of drama, often seen in Scandinavian cinema, without contributing any new variations. One of the visual aspects that most stands out in relation to other Nordic films is the handling of the lighting, for which they received advice from none other than film lighting legend Vittorio Storaro. The work involved using different types of lighting for the different scenes and varying the dark Nordic tones, moving towards more luminous shades.

Asked at the press conference about the film’s title, Runge explained that it was intentionally ambiguous so that viewers would understand what is happening to the characters, leaving the doors open to multiple interpretations.

Happy End was produced by Madeleine Ekman and Martin Persson for Zentropa International Sweden and international sales are being handled by TrustNordisk.

"She wants to make a difference, but her own life is changed the most"

Swedish director Björn Runge has begun principal photography on his new feature, Mission 1325, from a script which develops with the shooting, for Zentropa International Sweden

Came to Cannes as an actress, but will leave as a Queen

Sweden’s Malin Buska was today presented as the lead in Finnish director Mika Kaurismäki’s Kristina of Sweden, the role Greta Garbo played in 1933

Castellitto a star of the 13th Lecce Festival of European Cinema

The event will take place April 17-21, in the Salento region. 10 films in competition and a focus on Slovenian cinema. Premieres include Gatlif’s Indignados

World premieres and prize-winners queue up for first Filmfest Oslo

Simon and the Oaks leads race for Sweden's Guldbaggar

With 13 nominations, Swedish director Lisa Ohlin's new feature, Simon and The Oaks [pic], leads the race for the Swedish Guldbaggar - the country's national film prizes - which will be awarded...

Swedish director Björn Runge, who won the Silver Bear at Berlin in 2004 with Daybreak, is for the first time vying in competition at the San Sebastian Film Festival with Happy End, a film that... 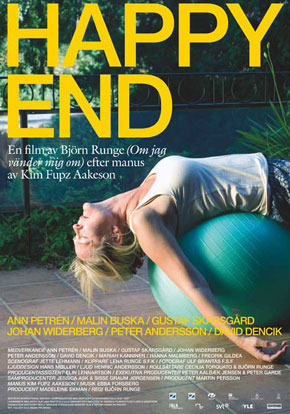