One of the best films to screen at the 59th edition of the San Sebastian Film Festival, currently under way, is the local historical drama The Sleeping Voice [+see also:
trailer
film profile] from director Benito Zambrano. The film is an adaptation of the eponymous work by the late novelist Dulce Chacón, who based her work on oral research.

The film looks at the fate of two sisters and is set in 1940, when Franco’s dictatorial regime had become all-powerful and threw all dissenters past and present into jail, which for many was but a passage on the way to ending up in front of a firing squad after a summary trial without witnesses or any real defense.

The dark-haired beauty Hortensia is a vigorous opponent of the regime from Andalusia who has been thrown into a woman’s jail, where she awaits her trail. Even though she’s pregnant by her husband, who is part of the resistance and who’s still hiding in the mountains, she doesn’t get any preferential treatment.

Hortensia’s younger sister, Pepita (María León), has come to Madrid to visit and be closer to her sibling but is soon sent on a dangerous mission to help her sister and the resistance. This allows Zambrano and fellow screenwriter Ignacio del Moral to not only play up the drama but also, perhaps surprisingly, also inject a good dose of humour, which mainly derives from Pepita’s impressionable attitude, speak-her-mind frankness and her inexperience.

Though over two hours long, the story is so immersive and the acting – especially from León – moves so effortlessly between drama and comedy that audiences will be entirely invested in the fate of the characters, which will come down hard on them in the film’s more soberly dramatic second half.

The film is one of three Spanish titles that could represent the country at the Oscars next year, the other two shortlisted titles are The Skin I Live In [+see also:
film review
trailer
interview: Pedro Almodóvar
film profile] and Black Bread [+see also:
trailer
film profile].

Maestranza Films produced the film, which is sold internationally by Match Factory.

more about: The Sleeping Voice

The Seville-born helmer is turning the best-selling Cristina Campos book into a film, which he is currently shooting on the Balearic and Canary Islands

Interview: Benito Zambrano • Director of Out in the Open

With his fourth film, the Spanish western Out in the Open, Benito Zambrano returns to Spanish cinemas and festivals after an eight-year break

Jaume Balagueró robs the Bank of Spain in Way Down

The director is in the Spanish capital over the next few days to film this ambitious action flick, revolving around a heist at the national bank located in the heart of Madrid

EGEDA considered The Fury of a Patient Man, the actor’s feature-length directorial debut, the best Spanish film of 2016

Vulcania: The past, the future or the – nightmarish – present?

This is a seven year old dream; that of Yves Vander Cruysen, councillor in charge of Culture in Waterloo

"People want to see films: We have to make it easy for them." 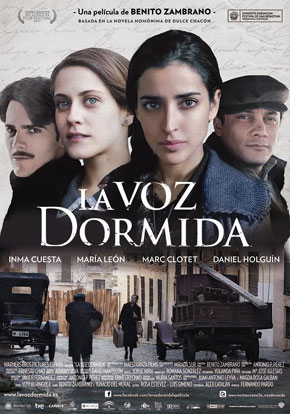