It was one of the most highly-anticipated films of the 44th Sitges Film Festival and it didn’t disappoint the audience, by whom it was enthusiastically received. Sleep Tight [+see also:
trailer
film profile], the latest feature by Jaume Balagueró ([REC] [+see also:
film review
trailer
interview: Jaume Balagueró, Paco Plaza
interview: Julio Fernández
film profile]), is an intimate exploration of domestic, everyday terror, that type of terror that is more frightening than the supernatural because, unlike spirits, it can appear in palpable, human form just behind the door.

It so happens that in Sleep Tight that terror is, literally, behind the door: he’s called César (Luis Tosar) and he’s the caretaker in a Barcelona apartment building through which the neighbours pass, almost all enchanted by the man who lends them a hand with this and that, completely unaware of the chronic hatred that César feels for people in general and his neighbours in particular. They don’t imagine that the small daily dramas that cloud their days are the work of the caretaker, who has access to the keys of all the apartments and doesn’t hesitate to use them without the tenants’ permission.

What appears to begin as a satire about the harmful effects of personal frustration (the portrait of a man who “can’t manage to be happy”) becomes, in Alberto Marini’s script, the portrait of a boundless perversity which, among the whole community of neighbours, is focused on a particular victim: the radiant Clara (Marta Etura).

Balagueró shows once more that he is a genre filmmaker. He knows all the ins and outs of the thriller genre and in Sleep Tight he uses this code to construct behind closed doors (almost all the scenes are shot inside the building, particularly in Clara and César’s apartments) a classic thriller without overlooking the psychological dimension of the characters in his story, however terrible it is. The almost intimately local tone of some scenes contrasts and, at the same time, heightens the tension and coldness of others. And the shared element in all of these is a remarkable Tosar, who perfectly fits Mae West’s famous maxim: when he is good, he is very good, but when he is bad, he is much better. Alongside him, Etura exudes an optimism which the caretaker tries to crush, while young Iris Almeida plays an unexpected but entertaining rival to the tormented protagonist.

Produced by Julio Fernández for Filmax, Sleep Tight is one of this autumn’s major Spanish film titles. It will be released on October 14 and promises to rival the final box-office takings of the first two Rec instalments, two blockbusters also directed by Balagueró in 2007 and 2009.

It was one of the most highly-anticipated films of the 44th Sitges Film Festival and it didn’t disappoint the audience, by whom it was enthusiastically received. Sleep Tight, the latest feature by...

“Spanish horror films are very highly regarded around the world”

Interview: Andrea Occhipinti • Distributor
"I believe in the future of VOD for quality cinema" 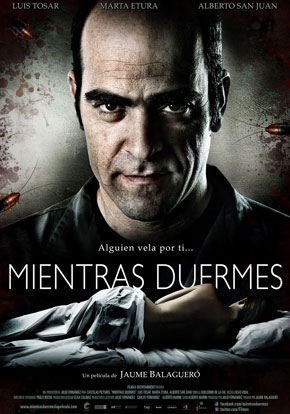